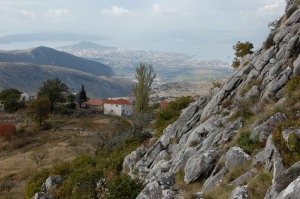 I have always loved wilderness disasters tales. But many left me wondering how seemingly intelligent individuals could walk into such obvious danger. This was the day I solved that mystery.

It was still morning as I stood at the trailhead. The city of Split, Croatia lay behind me. In front of me was the menacing route to Veliki Kabal. A metal cable insulated with deteriorating rubber was bolted to the mountainside. Appearing as if it once was a power line, it was not something I’d usually touch. But clinging to it seemed necessary for two reasons. The first was because of the steep drop on the other side. The second was because of my footwear. 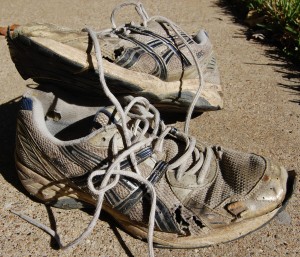 I believe, many years before, they were running shoes. Now, calling them shoes was being generous. When I found them in my garage, the summer before, they were worn, torn and covered in grass stains. I think they were my Dad’s jogging shoes before being demoted to lawn mowing duty – traditionally the final act a shoe performs in the Straw house before completely dissolving. Not wanting to pay for competent footwear, I granted them the opportunity to see the world. Over the next four months they became my running/hiking/everyday shoes. The last bit of traction left them in Wales and now they were just socks with shoelaces.

This proved problematic because the trail was just a jumble of rocks. Only occasional red and white bull’s eyes markings distinguished the path from surrounding fields of ankle-breaking splendor. To add to my worries, I hadn’t seen anyone since the talkative old lady in the village, and it soon became clear that it was going to stay that way. 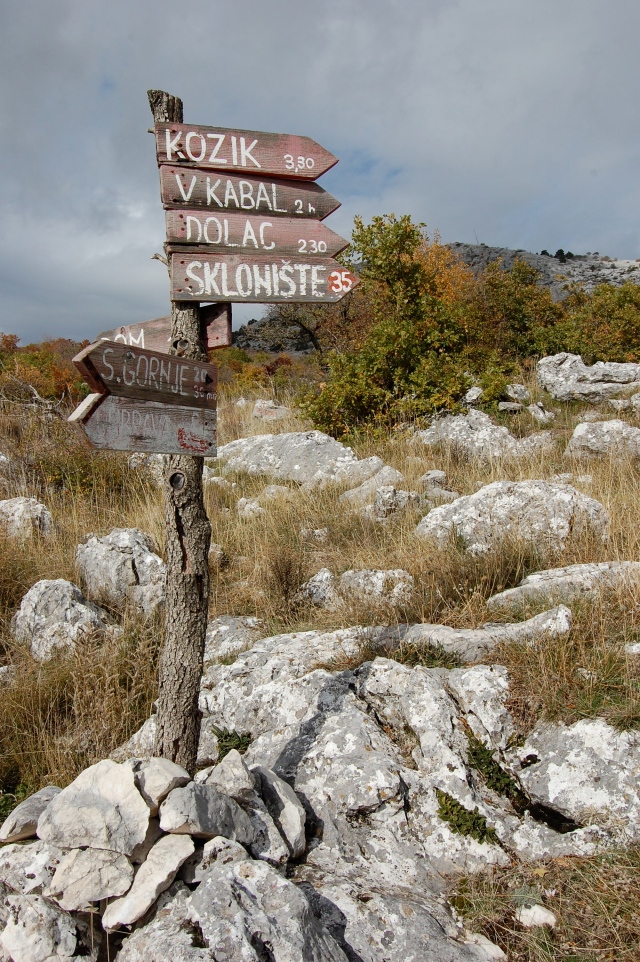 The sun shone intermittently from across the ocean, but more gray clouds approached from the north. The wind forced dry leaves from their branches and carried them across the mountainside. As I climbed higher, the trees grew smaller, the temperature grew colder and the clouds grew darker. Though I had a jumper, sweatshirt, beanie and a scarf in my backpack, all those layers would account for nothing when wet with rain.

As I continued up the mountain, my likely fate began to take shape. The rains would come and the pointy rocks would turn slick. I’d slip, hurt myself and become immobile. Lying broken on the sharp stone I’d be inundated. No one would find me. Hypothermia would set in and I’d freeze to death in a Mediterranean climate. Then I foresaw my tombstone. It read “Here lies Eric… He fancied himself as a man of the outdoors… I guess not.”

A loud cry broke my train of thought. Up the mountain, a hundred feet or so, a raven perched on a wobbly treetop. I froze in my tracks and watched it struggle against the wind, clinging to the high branch with its bare black feet. I never paid too much attention to literary omens, but I sure as hell knew what a raven meant.

In a small attempt at foresight, I began looking for areas to take refuge. Soon I discovered a cave around 3 feet high. It had a solid roof and was deep enough to provide suitable shelter for a Croatian mountain woman and me (the more inspiring fantasy of the day). I constructed an oversized arrow out of logs pointing to my cave. Surely I’d see this while stumbling down the mountain through sheets of blinding rain.

Then, only 150 feet later, I came across a mountain hut. What an upgrade! I pulled back the latch and opened the creaky wooden door (to my great relief, no monsters). There was a table, an old stove, a wall clock stuck at 6:37, and a variety of material either left out of kindness or necessity. I took stock of my supplies with unmatched excitement. Wow, a half-quart of vinegar, condensed milk, a pack of instant coffee, hard molded bread and onions – yes, four fresh white onions! I would survive off this and rain water for weeks, given the opportunity. The logical choice here was to set up shop, make a fire and maybe climb the ladder into the creepy attic – anything that prevented myself from continuing up the mountain into recognized danger. However, I had already used up all my logic building that arrow made of logs… and I had a schedule to keep if I was going make the summit.

I left the cabin and reached the final saddle in the ridgeline, which offered a panoramic view. To the west was an island-strewn sea. To the south were more crests of craggy, bone-gray rock. To the east was Bosnia. And to the north was the source of my misguided ambition: Veliki Kabal.

The ridge I was soon to climb

The final route to the peak was along a perilous ridge. Vegetation all but vanished, and the path became a cruel game of connect the dots up the jagged limestone slope. Racing upwards, I scrambled over sharp rocks, wide gaps and deep fishers. Then the rain came. I watched in horror, as the rocks under hand and foot became lightly spotted and then uniformly covered in water. Now, every other step was followed by a sobering slip*.

The raindrops grew larger and mixed with my sweat until my entire t-shirt was soaked through. My visibility was cut down to tens of feet as I climbed up through a cloud. I could only see the next ridge of wet stone immediately before me. Not quite panicking, but growing more desperate to make the peak, I quickened my pace. At one point I leapt across a small ravine over the tops of stunted dead oak trees and jagged rocks. Landing on a tilted flat rock on the other side, I lost all traction and slid backwards into a bush. I remained in its thorny embrace while panting and swearing to never do something as foolish again when the clouds broke and the rain ceased. Then I saw it. Looking straight ahead, no more than thirty feet away, was the summit of V. Kabal. It had to be the top; there was a large cross on it.

It’s a rare occasion in life when stupidity is rewarded so greatly. Yet, as I stood on top of that mountain, scanning every inch of the horizon, I knew it was that kind of occasions. I could see the multitudes of islands, big and small, floating on a far off glinting sea. The neighboring mountains, though dark and rain-battered, stood out from the stormy skies. Far below them were wide valleys cut with tiny roads connecting old villages. Then I looked down upon Split and wondered how 200,000 people could fit into an area I could crush between my thumb and forefinger. Somewhere down there, amongst the distant grid of tan buildings, was Andrew, probably eating pizza. 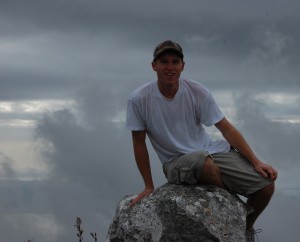 After minutes of idle gazing and reflection, I began shivering. Then, as if on cue, the sleet hit. A mixture of ice and rain pelted my body as I surveyed the sea and eye-level clouds one last time. Feeling both accomplished and stupid, I grabbed my gear and turned back.

As unfair as it may be, I survived. I didn’t even hurt myself. I know, what a pity. Although the way down proved as frightening as I had imagined, I used greater caution and took my time. By the time I made it to the cabin, the rain stopped and the skies cleared to the west. And as I hiked back to the village, the trees lit up with autumn color, the sea sparkled with sunlight and little forest animals walked alongside me while I whistled (I’m just kidding, I can’t whistle). 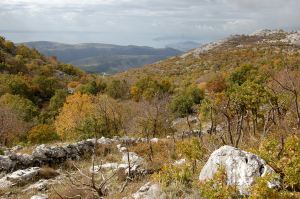 I reached Sitno Gornje in time to catch the evening bus back to Split. A group of elderly villagers formed at a cautious distance from the oddly dressed stranger. As if on a dare, one man approached me and began speaking the native tongue. Then he pointed down to my damp hiking shorts and tattered shoes before looking back up at me. “Yes, I’m a dumbass.” I explained. Somehow, I think he understood this. We exchanged smiles and nods and then got on the bus.

*According to the infallible information source that is wikipedia: In April 2009 speleologists discovered human remains in pits on Veliki Kabal, originally thought to be victims of the Yugoslav Partisan from World War II. The victims were later revealed to have been from the post-war period. A police investigation was launched. (My personal theory is the mountain people got them, either way, it’s humbling to know not everyone makes it off that peak.)

Reviewed and Edited by Katie Chassaing

This entry was posted in Travel Tales, World Travels. Bookmark the permalink.

3 Responses to Hiking in Croatia Part II: A bad idea