On the train from Berlin to Prague, Andrew and I met a guy from Ontario named Craig. We spoke with him the entire four-hour journey as we passed through river valleys and between foggy mountains. By the time we reached Prague, I found Craig to be a very likeable travel friend. But what Andrew found was something infinitely more rare.

As it so happened, the course of the first conversation led to food. It was then that Andrew and Craig discovered their equal infatuation with meals served fast and greasy. Once this was established, the two spoke for hours on the subject. And this was not just idle chitchat. It was the sort of lively engrossing conversation two people can only have when they share a deep innate passion for something. The fact that it was about Big Macs and combo buckets from KFC made it no less beautiful. They discussed every aspect of their favorite orders with such vivid imagery and lush detail – the texture of butter-laden mashed potatoes, the radiant heat from a slice of melted cheddar, the way a Jack in the Box taco feels between your teeth – it was nothing short of poetry. Normally, I’d jump into such talk with Andrew, but I would have been out of my league. I knew it. They knew it. So, I just looked on and listened in a state of respectful awe. 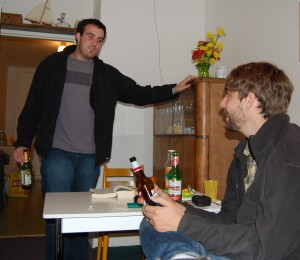 Over the next few days in the Czech capital, the conversation continued. Eventually, after every North American value meal and nugget deal had been covered, there was a brief silence. Then, Andrew’s eyes widened as he turned to Craig. “Hey, do you ever buy a ton of burgers and then keep one on you to save for later?” Craig answered without hesitation. “Oh you mean pocketburger, of course.” It was a concept Andrew had been tinkering with for years, but now he had a name for it. “Pocketburger” he repeated softly, as if it were a cherished secret. And that’s when I knew Andrew had found his fast food soulmate.

While the burger was the most common item to keep safe in a breast or jean pocket, Craig made it clear the concept was limitless. One day we took a three-hour free walking tour. After trouncing around the tourist-packed streets of Prague for hours, I noticed Craig eating a big yellow banana. “Where in the hell did you get a banana from?” I asked. He looked at me for a moment and then cracked a sly smile. “Of course,” I thought, “he’s had it on him the entire time.” And my, what a good-looking banana it was – yellow, firm and spotless. If you had given me the same piece of fruit, it would no doubt have turned into a bruised brown mess over that time frame. Indeed, the man was professional. 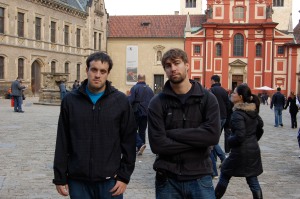 We spent three beautiful days together. A bulk of the time Andrew and Craig spent deep in conversations, covering everything from Xbox Live to movies to music. But no matter where the conversation took them, the talk would, without fail, drift back to warm treats in the end.

We left Craig one morning. We had to head south, and he was going to Ireland. It was sad for all, but I believe it was hardest on Andrew. It’s a tough reality of traveling – to find a person so fitting only to have them ripped away from you in a matter of days. Yet, Andrew had learned some invaluable lessons in fast food consumption and particularly, pocket storage. In that way, Craig would always stay with us. Every time Andrew would cram a room temperature McDouble into his mouth, he was closer to Craig. 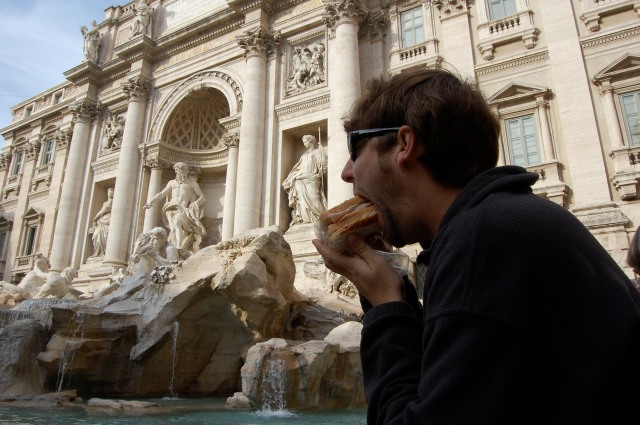 Andrew jamming a turkey sandwich into his mouth in Rome; not a PB, but you get the idea.

This might have been the reason Andrew’s pocketburger consumption tripled after Prague. Or maybe it was because the concept became even more appealing now that we knew what to call it. Either way, he spread the notion far and wide to all our new travel friends and it was well received. So much so, that by the end of the trip Andrew was receiving pocketburgers as gifts, courtesy of our Canadian friends Stephanie and Jill.

Only once was the pocketburger responsible for open conflict. We were in Rome with our Canadian friends and it was our last night, so we decided to go all out. This, of course, translated to wandering the streets with 6 liters of cooking wine. Andrew procured three burgers, devouring two readily and saving the final one for breakfast. But the next morning, it was nowhere to be found. Andrew was distraught. Trying to help, I brought light to the possibility that he simply got drunk and ate it. But Andrew scoffed at that idea and began implicating me in its mysterious disappearance. I swore I hadn’t consumed his treat, but I don’t think he ever believed me (which might explain why I 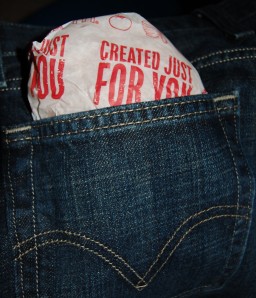 found a stinky burger wrapper in an obscure pocket of my backpack after the trip – Andrew’s revenge, I suppose).

With the exception of that lone incident, the pocketburger was always a symbol of strength, cunningness, and the enduring will of North Americans to eat poorly in the midst of some of the finest cuisine on earth. It made our trip a bit cheaper and gave Andrew a name for one of the most ingenious concepts of the 21st century. And we have Craig to thank. So if anyone ever questions the contributions Canada has made to this planet, just say one word: pocketburger.

Reviewed and Edited by Katie Chassaing

This entry was posted in Frugal Bastard Tips, World Travels. Bookmark the permalink.