Overnight in the Clouds: Welsh Hiking

Striking a pose he must have seen in an REI calendar, Andrew stood on a large rock, scanning the valley below with his hands at his hips and his feet spread to support the weight of his backpack. I turned and looked the other direction, up the mountainside. Lost was perhaps too strong of a word; I knew where we were. I just didn’t exactly know where we were going – a fact, I feared, Andrew was beginning to catch on to. 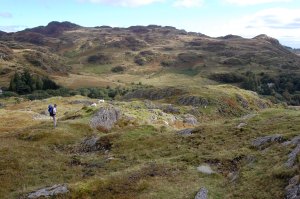 The start of our hike

While Andrew continued gazing off over the rolling Welsh countryside, I consulted my map. And by map, I mean the pictures of a map I snapped in an outdoors shop while the owner was looking the other way. In haste, I zoomed in to the section of the National Park we were in. Some of it was blurred and all of it was in Welsh, a language formulated mainly from random spoonfuls of alphabets cereal. I squinted and tried to make out the topo lines. “Are you sure this is really a trail?” Andrew shouted up to me. “Positive!” I yelled back. I put my camera away and pointed out a new direction of ascent. “It’s this way,” I said. I wasn’t lying. It was a trail…just not necessarily one used by humans. We had, mind you, long since left the realm of people and were now strangers in a land of sheep. But this gave me confidence; I figured if those dumb animals could climb the mountain, then Andrew and I would at least have a sporting chance.

Leading the way, I zigzagged, backtracked and frequently stopped to behold the ascending ridge before me with increasing bewilderment. “Don’t worry,” I said, sensing Andrew’s apprehension. “We just have to keep to the middle of the ridge and we’ll be fine.” Whether he believed me or not, Andrew nodded then continued to follow. Despite the unfriendly terrain and ambiguity of our route, the scenery was undeniably grand. As we rose higher up the mountain, it only became more fetching . The trees had disappeared, leaving only waving yellow clumps of grass to keep the rocks company. Sparse pockets of sunlight dotted the dramatic slopes and the highland lakes were perfect mirrors to the sky.

When not clambering over outcroppings, we were often navigating through bogs. I went through great pains to keep my feet dry, daintily prancing from rock to rock over soggy areas. But it was all in vain. At one point, I took a long bound from a rock to what I hoped was solid ground. Alas, my foot penetrated the earth like a spoon into Jello. I was halfway up my calf in mud before I yanked my leg out. As I cursed, Andrew took immediate delight in the situation. (It was okay though, I’d get him back later… by putting sheep shit in his sausage roll. Speaking of which—Andrew, you were right, it did taste funny.)

By early afternoon, the ridge leveled off and we began walking upon the gently undulating spine of the mountain. With this, a more pronounced path formed that included real human footprints! The excitement was short lived, however, as it led strait toward another obstacle. A stonewall stood over six feet tall, solid, without an obvious weak point and topped with an uninterrupted dressing of long, sharp slabs of stones. Spanning as far down either slope as far as the eye could see, it looked impenetrable. We regarded it in awe for quite some time.

Most impressive, however, was the thought of how much effort must have been put forth in building it. In Scotland we toiled for a day, digging up a 10’x10’ pile of stones, moving them no more than 45 feet and placing them in a crude pile. The work we did would have probably accounted for about 1/10,000ths of the total labor need to erect this wall. God knows when or why it was built, but I’m sure of this: whoever constructed it was intent on keeping somebody out or something in. Trying to climb over it looked about as dumb and dangerous as climbing over razor wire. 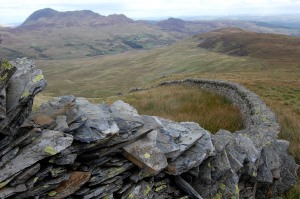 Luckily, in all his genius, modern man invented stairs and ladders. We were on the other side in 30 seconds.

Shortly after, Andrew and I began another steep climb straight up through shattered piles of rocks. The mountain was now fully covered in shadow and the temperature dropped accordingly. We had come prepared with heavy jackets. Unfortunately, we did not have the same foresight when it came to bringing enough water. Though we weren’t going to die of thirst up there, we weren’t exactly thrilled about the prospects of drinking from the sheep ponds. We did our best to conserve liquid as we crept higher, toward an unseen summit and a shelf of low cloud.

After toughing out the last few hundred yards, we reached a round-topped high point. Our reward was instant. We could see Tryfan, an unmistakable feature on my “camera map.” Dominating the landscape, the gray horn of granite rose from the valley and joined our ridge with a sweeping saddle. At its base was the main hiking route, made visible by an outstretched conga line of bright windbreakers snaking skyward. I looked back at Andrew and beamed as though I had always known our location. We dropped our packs, claimed the area as our campground and ate lunch. Then we left our backpacks and joined the procession of tourists up to the top of the windswept mountain.

That evening, we sat outside our tent above a low veil of clouds and relished our surroundings. We watched the clouds wash over valleys, funnel between mountains and, finally, disappear out over the distant glimmering Irish Sea. Where our exact location on the map was, the driving question throughout the day, now seemed trivial. What did it matter? The view from the mountain on the next range over would be just as impressive. What was more important, we came to recognize, was where we weren’t. If we had taken common advice, we’d be in a place that was neither remote nor obscure, neither distant nor compelling. We’d be home – a wonderful place to be following an adventure, but rarely a place for one. Yet, instead of sitting in a florescent-lit office in Dallas trying to solve a spreadsheet problem, we were sitting atop a mountain in Wales trying to figure out if the small ponds below us had drinkable water. As the last colors of the evening dulled around us, we realized that years from that moment we’d be at work, in a car at stoplight, or at home in front of a computer, wishing we were back there, having trouble navigating up a pathless mountain, not quite knowing where we 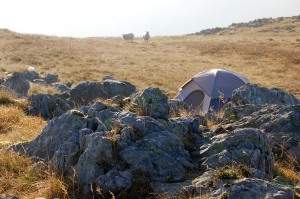 Reviewed and Edited by Simone Fraid

This entry was posted in Travel Tales, World Travels. Bookmark the permalink.

3 Responses to Overnight in the Clouds: Welsh Hiking