Cuy: One Man’s Pet is Another Man’s Dinner

Before setting off for Ecuador, each of us made a mental list of things we wanted to do, try and see. Trevor sought the 100+ foot monument of the winged Virgin Mary of Quito. Wesley wanted to scurry around some Incan ruins. Shane hoped to be involved in some sort of volcanic disaster. I, not so secretly, wished to be kidnapped by paramilitaries and taken into Colombia, where I would make jungle animal friends and finally learn Spanish before my eventual escape. Some goals, I admit, were more realistic than others. But, we all shared in one profound desire – to eat Cuy, or as it’s known at PetSmart, Guinea Pig. 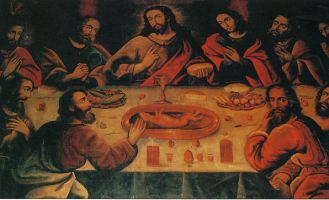 Marcos Zapata’s 1753 painting of the Last Supper in Cusco.

Before it became a modern companion for suburban children, cuy (pronounced coo-wee) was a cultural delicacy of this region. Domesticated from a native rodent, the animal was a valued food source before the Spanish arrived. When my parents visited Peru in the early 1980’s, they stood in a cathedral in Cusco staring at a depiction of the Last Supper. In the center of the painting, in front of Jesus, was a little guinea pig on a golden platter. Endorsed by Chirst, cuy remains an important meal to people of the Andes Mountains… and standout novelty cuisine to four guys from Texas. 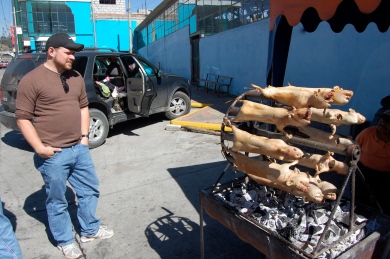 As we drove through the Andes during our first week in Ecuador, we scoured the roadsides for cuy. Yet, every time we found some, it either wasn’t cooked yet or we had just finished a meal. Towards the end of the trip, our scanning became more frantic. Once, Trevor swore that he saw them out on a spit, but we found only a pig and chickens roasting – no cuy. We mocked him for days, but this only strengthened Trevor’s resolve. After a few more unconfirmed sightings, he finally made a positive ID right off the Pan-American Highway, north of Cuenca. 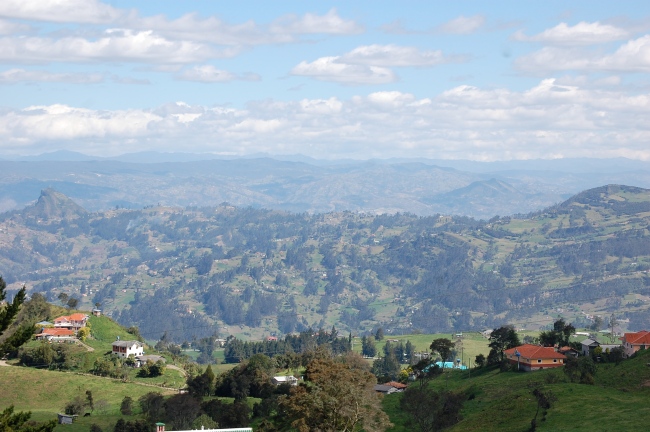 Rain splattered our windshield as I pulled off the busy road. The four of us dashed across the street towards two women, tending the open grills. There, we found a giant stuck pig, two chickens, and, sure enough, a well-roasted guinea pig. Trevor celebrated and began to scold us for doubting him as the younger woman approached. We pointed at the big rodent. She acknowledged our order with a slight nod and led us to a table on a covered porch.

I’m not sure if health codes are a ‘thing’ in Ecuador, but if they are, this small eatery wouldn’t meet even the laxest standards. Stray dogs with swollen udders wandered under the table between our legs. The silverware looked hastily washed and the water that washed it was probably just as suspect. It was the sort of place our guidebook recommended against. Wesley even witnessed one of the women spill a bucket of cabbage and walk away, leaving it sprawled out upon a dirt floor. We never knew what happened to all those veggies, but we could guess.

As we waited for our food, the older woman took a gas blowtorch and seared the outsides of the roasting pig. While watching in awe, we heard the unmistakable sound of a chicken call. Not a ‘cluck, cluck,’ rather a more urgent ‘be-kah!’ This certainly wasn’t a rare noise in a country where chicken is served for breakfast. But, as we looked around, we couldn’t locate the source of the commotion until Shane noticed a moving potato sack. As he pointed it out, the bag, tied shut with twine, went motionless. We all watched, listened and waited. Finally, the chicken sounded off again, while the bag lurched forward and jostled back and forth. About this time, our curiosity shifted from the captive chicken to our table – the food had arrived.

There it was – a single cuy – split in two and set out for us on a decorative plate. The roasted critter halves lay side by side, with their little appendages still attached and sprawling out over the edges of the dish. Feet, ears and head were intact. But the fur was all gone, as was its once jolly disposition. It looked like a former pet pulled from a house fire. Each piece was cut in two, so Wesley grabbed a top and I took the bottom. Shane and Trevor did likewise. It felt a little weird, but I remembered the story of that painting in Peru and thought WWJD?

After exchanging the kind of looks people share before entering a muddy body of water, we each tiptoed into our given sections of the creature. Yes, we were all a bit apprehensive, but if anyone was completely grossed out, they hid it well. We had traveled too far to chicken out now. Speaking of which, I won’t say ‘it tasted like chicken,’ because it didn’t. Its flavor sort of reminded me of rabbit, which sort of tastes like salty turkey to me. During the meal we conversed a little, but directed most of our attention to the task at hand. Trying to avoid any still-attached organs and limbs was a challenge; this wasn’t food you could blindly consume. Indeed, sorting through all its little precious guinea bones was difficult, but it was well worth it. 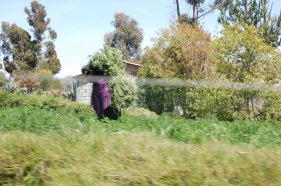 A woman carrying a bushel of grass and weeds on her back: food for her cuyes.

Health concerns aside, it was fascinating to eat at this roadside spot. Within a small space, there were animals in nearly every stage of food production – free roaming, captured, slaughtered, cooking and on the dinner plate. It felt a long way from America, where we tend not to leave heads on anything we’re about to consume. I guess it helps maintain the delusion that the meat products we ingest come from neatly proportioned, plastic-wrapped packages from the grocery store, not creatures that could once be considered cute.

In Ecuador, they know damn well what their food is and where it comes from because they still have an intimate relationship with the entire process. So I suppose decapitation is an unnecessary step – there’s no need to pretend what’s on your plate didn’t used to be a guinea pig. And for us, there was no pretending either; we were, at last, devouring our collective wish. And now, if any of us are ever on a first date that’s going too well, we have a perfect story to tell.

Reviewed and edited by Simone Fraid

This entry was posted in Travel Tangents, World Travels. Bookmark the permalink.