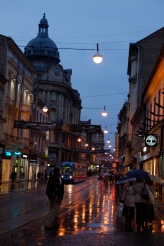 The day was dreary. Gray skies reflected the tones of the streets and buildings below. Light rain fell frequently, interrupting our sightseeing attempts. Even on a sunny day, Zagreb, the Croatian capital, was an awkward conglomeration of old and new. Ancient churches and tiny, bowed-roof houses were interspersed with flashy, modern shopping centers. Most of the inhabitants wore muted colors and unfriendly expressions. So I don’t believe it’s a stretch to say the girl who worked the front desk of our hostel was the highlight of my visit.

Although our hostel was in a less-than-memorable, kind of worrisome part of town, it was still pretty nice. It had new and well-kept rooms, a nice kitchen and a basement with a TV and many DVDs. The oddest element was the seemingly unnecessary amount of staffers always gathered around the front desk. They appeared to outnumber the guests; it sometimes seemed Andrew and I were the only people staying there. This was fine by me – it gave me better odds with the young woman employee.

Old homes next to new ones in Zagreb

We had seen her while checking in our first night. She stood out amongst two middle-aged men and younger male workers. With dark hair and brown eyes, she stood against the back wall in slim-fitting blue jeans and a black sweater. One of her forearms crossed her midsection, supporting her other arm, which held a cigarette. Occasionally, she’d bring it to her lips, enlivening the embers for a moment before exhaling without effort. As she watched us, she shifted her weight between legs, causing her hips to sway ever so slightly. Andrew, of course, didn’t notice any of this, being happily pre-engaged. But I was enamored.

The cold and rainy October weather forced us to spend the night watching movies in the basement. When we got hungry, we headed to the lobby for a dinner recommendation. To my great delight, she was sitting behind the counter, smoking a cigarette. Upon hearing our request, she walked around the counter and handed us a menu for takeout pizza. This was an ideal choice for the wild and crazy night Andrew and I were planning in the basement. Yet, as we looked over the menu, we noticed it was written in Croatian. “Excuse me miss, do you mind telling us what some of the ingredients are?” I asked. She smiled and walked over to me. Putting a gentle hand on the menu, she leaned over it and, in the process, began leaning against me. “What would you like to know?” she asked looking up at me. Shocked to be touching this sultry foreigner, I was momentarily speechless. “Well, okay, what does this mean?” I finally asked, pointing to a random word. “Thees one is mushroom… and thees one is tomato.” As she spoke, her body pressed against my side. I glanced back at Andrew to make certain it wasn’t my imagination. He just stared back in wide-eyed confirmation. “Ummm and what about this one?” I asked, pointing to the side of the menu farthest from her. She leaned against me harder before looking up and saying, “Thees one, thees one is onion.” Then I fainted.

Okay, I didn’t faint. But I was fully stunned with my momentary good fortune. She sounded like a sultry temptress from a Bond film and smelled like angel wings and cigarettes. It is, by far, the best food ordering experience I’ve ever had. And as we devoured the pizza back in the basement, I knew I had to get back up to that front desk.

In Europe, Andrew typically served as a loyal and obliging wingman. This mission, however, I decided to embark on alone. Although I didn’t expect anything and lacked a coherent plan of action, I knew it was time to go. Andrew held down our spot in the basement (in case there really were other guests lying in wait to claim our couch and pizza), while I ventured up the stairs into what would become one of my most ill-fated attempts to gain the favor of a female.

I don’t recall how the conversation began; all I remember is how it ended. Whatever the initial subject was, I eventually ran out of normal things to say. So, naturally, I brought up the Yugoslavian War. Smooth, I know. But it was so strange speaking to a civilian woman in her early twenties who had witnessed war. So, I asked if she remembered the rocket attacks on Zagreb. “I was a little girl, but I remember…” she began. Now, if movies had taught me anything, all I had to do was ask one more marginally prying question. This would assuredly launch her into a sorrow-filled personal anecdote, which would conclude with her weeping in my comforting embrace. So I made my move. “What was it like?” I asked. She considered the question for a moment. Then she spoke. “It was horrible, many people died.” A silence passed. After a few seconds I realized it wasn’t merely a dramatic prelude to the story – she was finished. Only then did it occur to me it was a dumb question; it just took her curt answer for me to understand. My mind raced for a good response, but all that came out was an awkward “Ohhh.” She lit a new cigarette and began shuffling through some paperwork on the counter. “Well,” I said in resignation, “I best be heading back to the basement, Andrew’s waiting.”

“Howww’d it go?” Andrew asked from the couch. “I was doing pretty good… until I brought up the war.” I responded. “Oh no,” he said, a bit disappointed, but mostly amused. After recounting my abject failure, we spent the remainder of our evening drinking warm Croatian beer and watching movies. I learned a lesson that night and have removed tragic conflict from the list of possible topics to discuss while trying to impress foreign members of the opposite sex.

Reviewed and Edited by Simone Fraid

This entry was posted in Uncategorized. Bookmark the permalink.