Welcome to My Canoe 50 Campaign 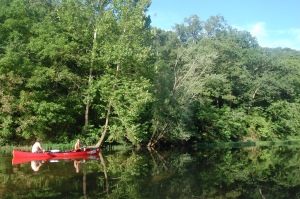 An optometrist once told me a story. It was about a middle-aged man whose eyes he looked at from time to time. This man had traveled throughout the world and had done a lot with his life — he was far from boring. One day, as the optometrist told it, he asked this patient how come he had all these great tales of travel and adventure. The man answered that when he was in high school, his father took him to a retirement home to visit with the old folks. I imagine there were pleasantries involved and discussions about the weather. But, the main two questions the father asked each elderly man and woman were “what do you wish you had done more of and what, if anything, you regretted in your many years?” The answers were all the same; they wish they would have traveled more and taken more chances when they were young. And that, the man explained, was what set the course of his life towards travel, towards chances and towards adventure.

On a trip to Oman, seeing how close we could get to the Yemeni border

True, this tale could be a great embellishment. Hell, it might be a complete yarn. Regardless, since I heard it back in high school, this story has guided many of my life decisions. To this day, I’ve followed the first statute to the best of my abilities — I’ve traveled throughout the world, spending well over a year of my 20’s outside the United States. But, besides these trips abroad, I haven’t taken many chances. I’ve been with the same company for 6+ years. It’s been good stable work in my field, but far from anything close to a calling. Like many people, I should have actively sought something better years ago.

Once, I nearly up and quit… But, I didn’t. Thinking better of it — thinking on financial terms and about the social awkwardness of being unemployed stopped me. All of these, I realize, are responsible concerns, grounded in common sense and the acquired wisdom of my quasi-adult life. The problem is, risk aversion and sensible consideration rarely spawn adventure. At 30, I’m entering the final years of being ‘young’ by almost any metric. I feel the clock of responsibility winding ever tighter. Structured savings accounts, new car payments and home mortgages seem to find everyone, eventually. I imagine, one day, they’ll find me too. But not yet. Now is the time to take a chance before I wade any further into, what often feels like, preordained adult life. Now is the time to take the full plunge into one last youthful adventure. Now is the time I get a canoe, quit my job and spend one long summer paddling a natural body of water (with a night of camping alongside it) in all 50 States. Welcome to my Canoe 50 Campaign.

A large component of my summer journey is to raise funds for the environmental NGO American Rivers. They are a 40+ year nonprofit with a history of protecting and restoring rivers and watersheds around this nation. They are inline with my views on environmental stewardship. American Rivers understands the importance of safeguarding our waterways and wildlands for the good of nature and future generations. In 2016, they removed 2.4 million pounds of trash, removed 16 antiquated dams and gave $100,000 in grant funds to local projects to improve river health and recreation. While I’m not asking anyone to ‘go fund’ me and my trip, I would greatly appreciate support in the form of donations to American Rivers. I’ve set up a link to raise money with them: https://www.crowdrise.com/canoe-50-campaign. Perhaps you’d like to ‘sponsor’ me a buck per state (I’m not much for math, but I believe that’s $50), or give whatever you see fit. I want to raise a significant amount and given the scale of my adventure, I hope I can convince a sizable group of friends, family and supporters to part with some of their hard earned cash. If it helps, think of it as ensuring I spend many frightening nights alone in the wilderness. Whether you’d like to sponsor my adventure or misery, it matters not. Either way, American Rivers will sure appreciate donations and so will good ole Mother Nature.

I completed my Texas portion last weekend with my Dad, which I’ll post soon. The remaining 98% of the adventure begins in around 2 weeks… Check out my ‘About’ page for more specifics on me, my trip and my reasons for canoeing all 50 American States.

This entry was posted in Uncategorized. Bookmark the permalink.