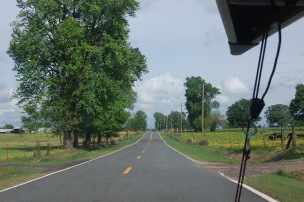 (State #3/50) I was set on canoeing my first two states back to back. In the late afternoon, I said goodbye to Shane in Oklahoma and headed towards Arkansas. The sun came out as I drove over swollen creeks and rivers, across the state line and into some of the finest rolling pastureland I’ve ever seen. Yellow flowers, green grass, blue sky, scattered white cumulus — all in the most vibrant versions of those colors. I arrived 2 hours later at the 270 bridge across the Ouachita River, about an hour before sunset.

Looking for river access and a place to leave my car, I pulled up to the Rocky Shoals Resort.  The office was closed, but an older man walked down a hill, waving at me just as I was driving away. We shook hands and he introduced himself as Ted. He told me that I could put in down the little road and park by the house. “How are you getting back? I can pick you up, call me after.” Ted insisted. “No, I don’t want to be any trouble, it’s only a 3 mile walk back from Fulton branch. I could use the exercise.” I explained. “It’s no problem, I can come pick you up.” Ted said and gave me his cell. I put his number in my phone, but didn’t intend on using it.

Down at the river, daylight was fleeting. I pulled Rider from the top of my roof rack, trying to balance the 16 foot craft and to not slam her down or injure myself. I loaded the canoe with haste (packing 2 headlights, but forgetting the first aid kit… not a great trade off). With the boat loaded, I went to fetch water from a spigot and found Ted and his wife sitting out on the porch. “He’s gonna canoe all 50 states in the Union.” Ted explained to his wife. She considered this for a few moments and then asked with equal parts alarm and disapproval, “And he’s getting on the river now?!” Ted’s wife had that sweet, over-caring demeanor ingrained in mothers — as if my canoeing near dusk was placing a worrisome burden on her evening. I did my best to assure her that I was going to be safe. Though I was burning daylight, it’s always endearing when people, especially strangers, care so much about your well-being.

Ted asked for my car keys in case they needed to move it; I handed them over without worry (I doubted this older couple sits around, drinking wine on a Tuesday evening, looking for opportunities to steal cars). Ted filled up my water jug and his wife mentioned that he should pick me up. “Give him your cell number, Ted!” she demanded. “I already gave him both numbers.” Ted replied. Then they had a brief conference and decided for me that I better call them when I take out. “If you don’t, we won’t give you your keys back. If you walk back you’ll have to walk to the next state too!” Ted said. “Alright, I’ll call when I take out.” I relented.

I bade them farewell and walked down to my canoe. “Do you have a gun?” Ted called  from the porch. “I’ve got a big knife.” I responded, hoping this would satisfy him. “You want one?” He asked. I thanked him but declined. At the river, I slid my canoe into the water and paddled for the opposite bank. In view of the porch, I waved. “Be careful!” Ted shouted. “I will! Thanks again and y’all have a nice evening.” I hollered back. I drifted further down river. “There’s a warm bed up here!” Ted yells again. “That sounds nice, but I’ve got to camp!” I tell him. We exchange goodbyes again. I rounded the bend with the sun already below the horizon.

I stopped at the first good spot I found, guiding the canoe into a lagoon on the side of a gravel bar island. I put up the tent on the highest ground, cracked a beer and gathered firewood. With darkness falling, I waited for fear of the night. It never came. I made a small driftwood campfire and cooked pasta. I camped 100 feet from a little rapid and fell asleep to the constant river-song.

I woke up to an exceptional morning. In a hoody, I crept around the island with my camera. The sun peaked above the spring-green elms and sycamores. Loads of song birds called from the tree lines. Woodpeckers called and filled the woods with the deep thud thud thud of their work. I watched a large black and yellow butterfly flutter over the smooth river stones behind the fire. To the South, a single vulture patrolled the sky, which was half blue and half clouded. The wind picked up and blew my still dewy rainfly off a clump of willows, thwarting my efforts to dry it. No matter, I wasn’t in a rush.

I boiled river water for coffee and fried eggs, spicing them with chili flakes my parents brought back from the Grand Bazaar in Istanbul. I wondered when the last time spices from a Turkish market were consumed along this river. I pondered this and drank my cup of crappy instant coffee in the shade of a small sycamore, looking off into the sun-streamed woods across a rushing green river.

I put into the Ouachita River by 11am with 7 miles ahead of me. I navigated the first bit of rapids with no issues, staying in the current and avoiding rocks. I spent time getting a feel for the boat and practicing my J-stroke, which allows you to steer without switching sides. Canoeing solo presents new challenges. Without the weight of another human up front, light breezes altered my course and a gust would swing the bow completely around. I fought the wind and decided I needed more weight up front. I made one big mistake — in a set of rapids I avoided a dangerous tree trunk, but got caught broadside on a small tree in fast water. I had to jump out to right the canoe and not take on water.

In addition to my, let’s call it on-the-river training, I failed to pack sunscreen. So, to cover my lily-white skin, I wore my Australian hat, dark glasses, a shemagh around my neck and a bright beach towel over my legs (going for a kinda beachy FDR look). Between my goofier than normal appearance and my rookie solo canoeing, I was a site to behold for the Arkansas locals.

Despite small challenges, I canoed along the clear river, passing small bluffs, little cabins and a few more fishermen (whom asked if I had a gun). I was off the river by 2pm and gave the resort a call. Ted’s son in law, Julius, picked me up 15 minutes later, saving me an hour’s walk. Back at the Rocky Shoals Resort, Ted handed me back my car keys — my reward for having them pick me up. “You’re welcome to stay anytime,” he said before returning to his work. I thanked him again. Then I picked up my canoe, strapped it on top of my car and hit the road for Louisiana, thankful for strangers.