(State #9/50) While Southern Georgia burned, Central South Carolina flooded. In back to back states, weather extremes from opposite ends of the spectrum altered my plans. Driving out of Charleston in the late afternoon, I called Congaree National Park. “I’d highly recommend against canoeing here,” a ranger said. “Like it’s just real swift moving or what?” I pressed. “Well, Cedar Creek, where you’d want to canoe, no longer has visible banks, so you’d just get lost immediately in the bottomlands. It’s dangerous.” He needn’t say anymore; I had no interest in getting lost in a flooded swamp.

From a gas station, I called a few state parks near my backup rivers. “We’re up 10 feet, at flood stage here.” I heard again and again. Frustrated, I looked at the map and thought I’d try for some coastal waters near Charleston. I spoke to a local outfitter. “What about if I canoed to that island?” I asked a woman on the phone. “Well, we don’t let our boats go there because you have to cross a major shipping channel.” she explained. I envisioned diving from my boat as the bow of an oil tanker loomed, poised to obliterate my canoe. “Okay, what about canoeing to that island?” I asked, getting desperate. “You need permits from the DNR for camping there. I wouldn’t want you to get a big fine.” she told me. Yeah, I didn’t want that either.

As I ran out of ideas, the woman perked up. “Oh! There’s our freshwater site in the National Forest, Still Landing on Wambaw Creek.” she said. “It’s not underwater or anything?” I asked. “No, we’re still running tours from there and there’s free camping at the put in.” she explained. Done, I thought. She gave me directions and I turned the car around and headed towards Francis Marion N.F. 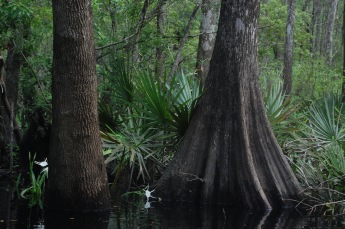 I drove a series of pothole ridden dirt roads through longleaf pine groves. I made it to the landing by 5:40 p.m. and was on the water in 30 minutes. I canoed upstream against the freshwater, tidal current. Immediately, I was awestruck by the creek and surrounding swamp. There were no discernible banks beyond the landing area; the main channel simply ventured, unimpeded, into the adjacent floodplains. Tupelos, palmettos, and bald cypress trees older than our nation grew up from the black waters. Many of the cypresses had trunks, thick as redwoods, extending all the way up to the canopy. The majority of the cypress crowns were broken and mangled from centuries of hurricanes and windstorms. A few old dead stumps stood jagged and 20 feet high, like the ruined skyscrapers of a dystopian future.

Pileated woodpeckers knocked on trees and swooped across Wambaw Creek. Night herons, swallows and songbirds filled the surrounding woods. A pair of barred owls flew in silence, through the mid story on my right. I grabbed onto a maple branch and steadied my camera to take pictures in the dim evening light. Chattering squirrels bounced along the cypress knees and bushes, only feet above the water. A few stopped to scold my canoe as I slid past. I heard one big ruckus and saw a large black tail curl around a tree trunk and enter the water. An alligator head protruded from the surface, staring my way. Minutes later, I stood up in my canoe and spooked a deer. I watched the doe trounce off into the swamp, white flag raised and brown water flying from her hooves. Around every bend I discovered more critters.

I was captivated by the forest. The palmettos and cypresses reflecting on the still, oil-black water felt primeval — older than antiquity, ancient beyond ancient. I was canoeing through a science book painting of the Carboniferous Period. It was the swamp scene with tree ferns and giant dragon flies, way before the dinosaurs. The woods grew darker and modern dragon flies (300 million years removed from their ancestors) filled the space above the blackwater, beneath the ceiling of leaves and needles.

After over a mile of slow, gawking paddling, I decided to turn around. I got out my GoPro to film a 4-foot gator on a log and canoed under a low fallen tree across the water. I was talking to the GoPro, being clever while trying to pass under the log. The sneaky current got me. All of a sudden I was pressing against the log, canoe tilting and I was about to swamp… in the swamp. Off balance, I struggled to recover. A branch caught by face and shoulder, knocking my hat in the water and with one big “bloope” my GoPro fell from my mouth (where, like a jackass, I was holding it), right into the blackwater creek. “Just don’t drop it in the water,” my girlfriend had warned after giving it to me as a gift. Taylor was going to kill me. 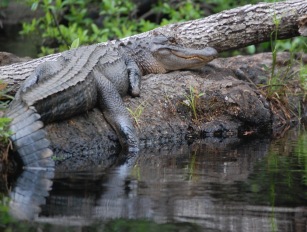 I canoed back feeling bad, embarrassed and wondering how I’d tell her, or if I should tell her. Or if I should make up something more harrowing so the loss of the video camera would pale in comparisons. Sobbing, I would say “and.. and the alligator came right at me and I was caught between a tree filled with bees and I barely got out alive… and I dropped my goooo proooo.” Then I’d blubber inconsolably. Something right out of a The Christmas Story. “Oh don’t worry about that, what’s important is you’re okay,” Taylor would comfort.

I arrived back before dusk. I fixed my tent (replacing the duct taped tooth pick splints from Georgia with a proper metal splint) and decided to worry about my lost GoPro later. I pulled out my guitar and a little cheap rum left from The Keys. Sitting on the seat of my canoe, by the tent, I began playing. With no one for miles, I decided to let my spare, out of key voice ring out for the pines, fireflies, moths, mosquitoes and creek monsters. I played with enthusiasm (The Band, CCR, Jim Croce, Joni Mitchell, The Decembrists, Dawes, etc.) for at least an hour until the rum went dry and my fingers were raw. I cooked up half of an orange jalapeño, a can of salmon, a tortilla and Beanie Wienies in an uncleaned, sandy skillet — it was not great. I went to sleep and had strange, sad dreams; sometimes you just do.

I woke up to a splendid morning and the sunshine lit the swamp and dissipated the lingering strangeness of the unpleasant dreams. I canoed the other direction, downstream. Wambaw Creek widened out and there were more upland longleaf pine areas on river right. The swamp remained on the left side. I saw a few more alligators and 3 foot gars just below the surface. I canoed from my knees, going as fast as I could on the paddle back — just for kicks. I got Rider up to a jogging pace and created a small wake. I looked back and watched, pleased with myself, as the baby waves lapped against vegetative bank, wreaking complete havoc on the palmettos and swamp tulips.

Overall, Wambaw Creek turned into one hell of a plan… D? It was a place I didn’t know existed until the evening before. It was an utter surprise of true, proper wilderness. As I drove away in the car, my thoughts shifted back to the pressing matter of the lost GoPro. Sure, I escaped the fires and the floods, but I still managed to lose gear. Passing between the rows of pines, I began brainstorming more elaborate tales of its demise — one of which you just read.

I’m joking of course. If that was a lie I would have made the alligator at least 10 feet long.