(State #14/50) My night in Maryland marked the one month anniversary of my trip — not a bad point to reach for my first paid night of lodging. Up until then, I had managed to find free camping, but the Mid-Atlantic proved to be a dill of a different pickle. I paid $27 for a tent site. It was only 26 bucks for residents. Tacking on a single extra dollar for out of staters seemed petty, like an official way to steal my lunch money. No matter, Point Lookout State Park, where the Potomac and Chesapeake Bay collide, was worth it. 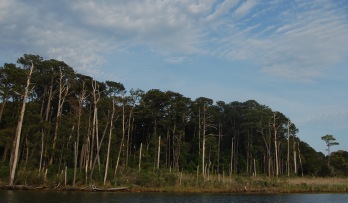 I set up my tent in the early evening before hauling my canoe to the calm bay, surrounded by saltwater marsh and bone-white dead trees and driftwood. I left the mosquitoes behind and paddled towards a boat ramp. Tall, narrow pines grew in thick stands on both shores. Ospreys flew across the mild evening sky and I saw the silhouette of a bald eagle perched on a dead limb. Maryland was not short on birdlife.

I rounded a rock jetty and turned the bow south towards the point. I canoed against the tide making tiny waves down the terminus of the mighty Potomac (which I assumed would have been completely drained by this point). I passed a couple sitting on a sand beach on my left. From 200 feet out, the guy called out “Hello!” I returned the greeting with a jolly “Hello to shore! How far are the Bahamas?” They laughed. “Take me with you!” the man yelled back. “Plenty of room for more!” I replied. A few moments passed and I regretted not saying “only room for the girl” instead.

Continuing down the wide mouth, I smelled the distinct aroma of cheap processed meat cooking over coals. Hot dogs sound good, I thought. I spied the culprits — a large family with long shore fishing poles camped out along the rocks. Then I caught my first glimpse of the lighthouse at the point; it was not the classic castle tower like you’d see on a calendar. Instead, Point Lookout Lighthouse was a complex of three buildings. Two looked like warehouses and the third like a 3-story 19th century schoolhouse with a 10-foot high turret on top. From that distance, I could see a lovely dusting of snow on the structures red roof. That’s what I imagined it to be, though I knew it was bird shit. A high chainlink fence, trimmed with barbwire, surrounding the point came into view and dashed my hopes of finding a little seafood cafe. Point Lookout wasn’t a quaint post card lighthouse — it was a fallback point for the zombie apocalypse.

I canoed past the wooden pillars of a pier, long since washed and worn away by the sea. The waves grew as I paddled out to the point where the Potomac meets Chesapeake Bay. I looked west across the Potomac to Virginia where I saw a shoreline of undulating green broken up by patches of visible civilization. I looked to the port side and only saw ocean. “I know the rest of Maryland is out there somewhere,” I said aloud. My canoe and the sea were unmoved by my comment. The bow slapped down into the troughs of the waves with the same rhythm as a minute before. No matter their indifference, I thought, switching back to an internal dialogue. Just because there’s nothing on the horizon doesn’t mean there’s nothing out there. 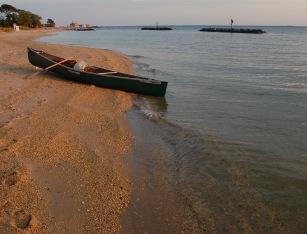 I turned around and headed back into the calmer mouth of the river. I stopped on a sandy beach and stepped out of the canoe into the clear water. Save for a group of women and a dog having a picnic, the beach was well-groomed, but empty, awaiting summer vacationers. I sat in the sand and wrote as the sun fell towards the West, coloring the high clouds above the Potomac. As it neared the water, I hopped back in Rider and paddled back across the rippling reflection of the late evening sky. 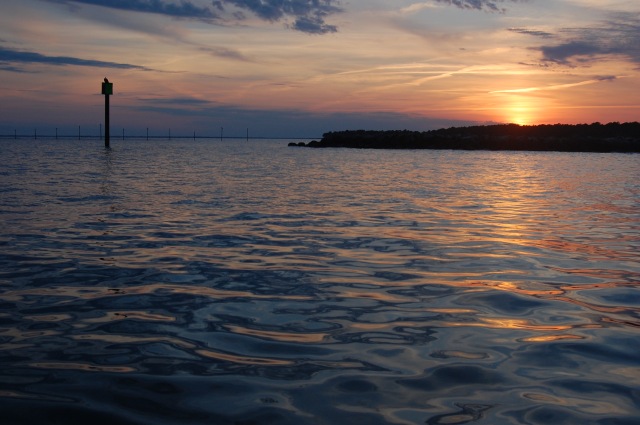 I didn’t realize it at the time, but the beach I sat on was formerly a Union-run, Confederate POW camp from the Civil War. Thousands of prisoners died there in what were said to be deplorable conditions (not surprising given the times). Tensions between the park and local southern sympathizers still exist to this day. There’s a privately owned Confederate ‘monument’ just outside the state park as well as a local group that is now banned from dressing up for reenactments in the park. The story goes that they threatened a group of protesters with bayonets and were kicked out for good. I’m just going to hope that really happened. (I should note that Point Lookout State Park has their own reenactments with bona fide historians and a nice museum).

I awoke to rain the following morning. Waiting in my tent for it to let up, the icky weather continued. Nature, I suppose, felt the need to balance out the previous night’s display with drizzle under a gray sky. With resignation, I put on my rubber boots and rain jacket and broke down the tent, throwing the sopping bundle strait into the trunk without packing it away. Then I unlocked the canoe from a light pole near the dock and secured it atop the car. I wasn’t going to be paddling back out to the lighthouse after all. 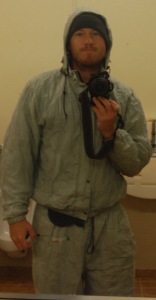 Half soaked and chilled, I headed for the campground restroom and gave myself a Viggo Mortensen via The Road  haircut in the mirror (yes, I cleaned up my mess). I turned on the shower and it ran cold for a minute. Thankfully, the water warmed to a steamy temperature. I took a 10+ minute shower (long for me) and can’t recall the last time a shower felt that good. Without shame, I made audible noises and said things like “Oh God, Yes” as I positioned my neck under the hot water stream. I don’t think anyone walked in, but if they had, they would have likely turned right around. I was getting my $27 dollars worth of that campground and, I decided, I’m attributing the pleasurable moans to that extra $1, out-of-state fee.