(State #16/50) Every time I used to rag on New Jersey for being a pit, my Dad would tell me about the greatness of The Delaware Water Gap. So, New Jersey was an easy one to pick once I decided not to skip it entirely.

I headed to the mountainous northwest corner of the state where the Delaware River cuts through a high ridge line, creating the impressive Water Gap. Now I use the word mountainous in a generous sense. One of the main reason for my anti-Jersey sentiments as a child, and I’m serious, was because New Jersey didn’t have a real mountain. I was obsessed with highpoint being at least 2,000 feet (the old English height requirement). I applauded surprising states like Alabama and Minnesota for making that mark, while casting mild aspersions on those that didn’t. On the East Coast, with the Appalachians, it seemed absurd not to have a proper mountain. I gave Rhode Island and Delaware a slight pass as they’re tiny and coastal, but come on New Jersey; Connecticut and Maryland could do it, what’s your excuse? ‘High Point’ (real creative, yous guys) stands at mere 1804 feet. I know it doesn’t make much sense but, like a lot of biases in life, it persisted despite logic.

I arrived in the ‘hills’ at Eshback landing on the PA side at 4:30 p.m. (the Delaware splits the states, so Jersey only really gets partial credit for the natural feature). The wind picked up the instant I hit the water, having its way with the bow of my canoe, making me look foolish to the cedars and silver maples along the banks. I cursed aloud as I strained my muscles, trying to keep the canoe strait. Thankfully, after a mile it died down and I was free to enjoy the scenery without fighting the invisible hand of Mother Nature. 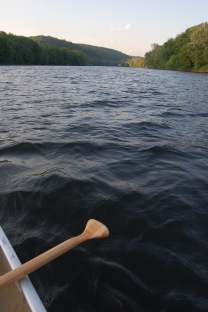 I stopped at an island in the middle, skipped a few rocks and grabbed a beer from the warm cooler. I drank it, but know this: Coors Original is meant to be served cold. After a long straight away, the river turned, revealing higher green ridges behind the woodlands on either side of the Delaware. I passed a motor boat, anchored in the middle of the river. Five taut fishing lines ran from the stern to the waterline at a 45 degree angle. “Y’all having any luck with the shad?” I asked the group of men. “We’ve got 10 so far in just an hour so we’re killing it! Too bad they don’t taste any good.” said one of the fishermen. “So doing it just for sport?” I asked. “Doing it as an excuse to drink beer!” I held up my drink and called out cheers and the jolly group of guys reciprocated. Little did they know I was a Cowboys fan. 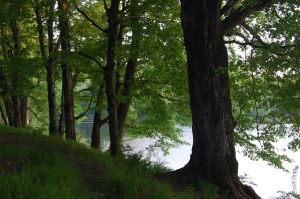 I checked the map at Bushkill landing and saw camping on the Jersey side a half mile downstream. Spotting brown camping signs on the tree boles, I beached where the river bends, across from the outflow of Bushkill Creek. I walked up a path to a fetching site with a fire ring in a cleared area under large oaks and maples. High grass, low shrubs and ferns grew in the understory. Then I looked down at my legs — I had about a dozen ticks crawling on my shins, navigating my leg, looking for a

spot to latch on. I brushed them off before they bit (I had seen signs for ticks and Lyme Disease and knew there was something of a boom in the tick population. The last two winters were mild in the Northeast, so the ticks just didn’t die off like normal. I made sure to look myself over again after I was done bringing up the canoe and gear).

Across the Delaware, the setting sun shone between the foliage across the river. As the evening was still warm, I grabbed my life vest and waded out into the river. The water was cold, but I counted down and dropped in up to my neck — refreshing and worth it. Swimming through the current, the water warmed as I entered the flow of the creek. Standing on the gravel bar, I gazed upstream and watched 2 deer walk with caution

along the bank. Light was fading, but I could see their heads swivel my way when I sneezed. I looked down river to a steep cedar covered hill where the last rays of sun were hitting the top of the ridge. When I turned back upstream the deer were gone. They had retreated to their woodland home and it was time I do the same.

I swam back across, mostly upstream, alternating between breast and back stroke. I was happy for the life jacket and was out of breath by the time I made it. Then it occurred to me that I had crossed the Delaware, as George Washington is portrayed in the famous painting. I doubt a similar image of me would appear as heroic, but you can be the judge.

I put up the tent and gathered the ample firewood scattered around my tent. Mosquitoes came out and I put on my raincoat and dusted my legs with Off. I had a fire roaring by dark and I fried up a gas station hot pocket on a skillet. Once a proud cook, I had digressed in my culinary ambitions. Thus is river life, I suppose.

The sound of clanging pots and pans woke me up in the night. My pirate alarms! I thought. I put on my glasses, unzipped the tent and shined my headlamp at a single raccoon near my cooler and food bag. Mischievous yellow eyes glowed back. He scampered off and my food was spared. Somehow, over a month in, that was my first raccoon sighting of the trip.

The next morning was filled with sunshine and singing birds, but I had trouble enjoying the day because I couldn’t stop sneezing. When I put in my contacts, I realized my itchy eyes were bloodshot. Allergies… I don’t get allergies! I thought. Allergies are for the kids that wear nose plugs at public swimming pools and spend all of inside recess drawing crappy pictures of dolphins and other lame animals (Yes, I determined at a young age that there was a strong correlation between these behaviors and allergies).

And now I was the kid with a nasally voice, congestion, itchy throat and red eyes. Trying to build the fire, I sneezed a glob of snot onto my leg; I just stared as it oozed down my shin, disgusted with myself. I spent the rest of the morning blowing my nose and resisting the urge to draw pictures of my favorite Beanie Babies.

At noon I canoed upstream to Bushkill landing, locked Rider to a signpost and ran a hot 4 miles back to my car along a trail. Chipmunks scurried as I jogged by and I caught more grand views of The Water Gap — clear green water glittered between even greener ridges. Was I wrong in my criticisms of this state? Driving back to get the canoe, I pondered the subject. Once I had the canoe back atop my car, I pulled out a notebook and added “ticks, raccoons and allergies” to a list titled “Problems with New Jersey.”