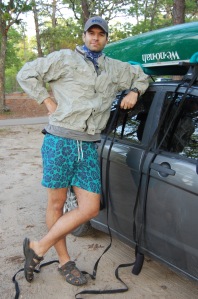 (State #17/50) Waiting, I stood next to my car and canoe at the train station in Providence. Bruno Marrs pumped out of my open windows. Trevor rounded the corner with a duffel bag over his shoulders and sunglasses glinting. We embraced in the half-awkward, yet genuine way longtime male friends can only do. It was fully romantic. After applause from onlookers died down, we chucked his bag in the back and got in the car. “Where are we going again?” Trevor asked. “The other end of the state.” I answered. 57 minutes later we arrived at Burlingame State Park.

For a park in the tiniest of the 50 states, there was an overwhelming number of campsites to choose from. “We have the largest camping area of any state park East of the Mississippi,” the ranger at the front desk said with pride. I believed it as we looked over a map with, no kidding, 700 campsites. Rhode Island was clearly compensating. But, coming from Connecticut where all campsites were still closed for the season or booked, I couldn’t have been more pleased. 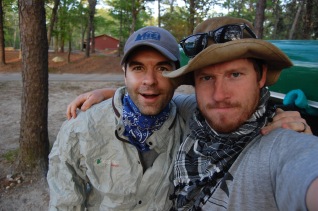 After Trevor and I claimed campsite #106, he handed me an REI bag. Inside was an assortment of goodies like a float for my new GoPro, jerky, fire starters and a little bottle of Johnny Walker. I was a little disappointed the fire starters weren’t coconut cookies, which they bore an uncanny resemblance to (I literally brought it up every time we used one over the next several days. I fear, some day soon, I will get drunk and eat one.)

The sun was still up, but the evening was already cooling down. We scrambled to gear up with clothes and the cooler. We put into Watchaug Pond as the sun sank behind a lone, high cloud. We canoed strait across and turned west to hug the edge of the pond. The water reflected the soft yellow glow of the sky, only broken by the dark tree-lined shore and silhouette of Trevor. Paddling along the wetland forests, we passed cedars, elms and maples with blood-red ‘helicopters’. Frogs called, songbirds sang and a red wing black bird, the Neil Young of the avian world, created vocalizations some may find appealing. Fish broke the surface and gnats hung in the air, but didn’t bite. At the end of the lake we entered a thicket of cattails, scaring up unseen Canada geese behind a wall of reeds. We enjoyed a lazy and tranquil paddle — talking and enjoying beverages as the colors retreated to the western horizon. 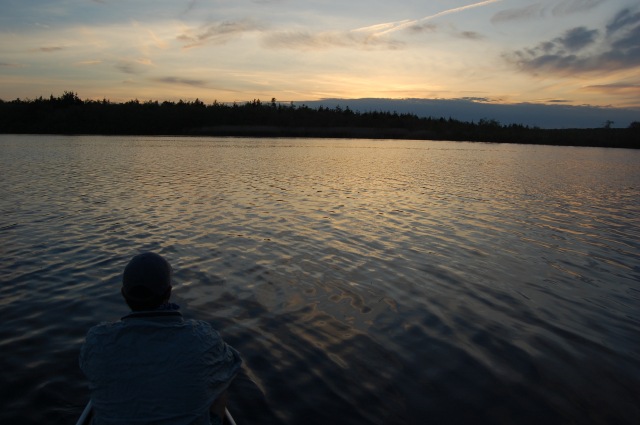 As night descended, we power canoed back towards the landing. The same group of Canada Geese had resettled on the water, so I adjusted course and we barreled towards them. Their honks increased in volume and frequency as we approached, cutting the calm surface with tidy, strong strokes. Closing in on our feathery targets, the geese began to flap and lift off the water, sounding the alarms as they winged away to a place where grown boys in a boat wouldn’t harass them.

Trevor and I carried the canoe back to camp and set up the tent. We had a revelrous time around the campfire before I finally, upon Trevor’s insistence, fried up sausages. It was 10:30 p.m. when we consumed our dinner in a manner unsuited for polite society. Our bellies full, our pants covered in grease and mustard, we retired to the tent.

Light rain drummed the tent by first light and continued. Yet, when I emerged around 9, the leaves around the campsite were still dry (the tent chamber amplifies the sound of even soft rain). The front had arrived; the temperature was in the upper 40’s and the sky was a dome of gray. When the sprinkles ceased, Trevor and I broke camp and launched back onto Watchaug Pond. 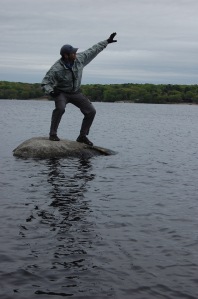 I steered Rider to the right, heading towards the other end of the pond. We paddled by large round granite boulders near the shore. The geology nerd in me was thrilled with these era — ice polished droppings of a retreating glacier, which carved out the erratics ‘kettle pond’ during the last ice age. These kettle ponds are shallow and sediment filled, so the Watchaug only averages 8 feet deep even though its over a mile wide.

Trevor decided it was a good idea to get on one of the small boulder islands. Trying to keep a foot on the rock and a foot to steady the canoe, he climbed up and I paddled away. After a photoshoot, retrieving Trevor wasn’t easy. I steered from the true back seat (as opposed to siting backwards from the front seat to shorten the bow 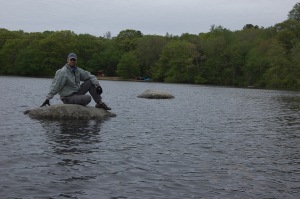 — what I do when I solo) and without Trevor’s fat ass weighing down the front, the bow lifted out of the water. Wind picked up and pivoted my boat as I remained, more or less, in the same location. It took about 5 minutes to reach a point where Trevor could hop back in the canoe. I waited for him to lose balance, fall and bring Rider and me down with him. I knew I’d swamp the canoe eventually, but in a pond in Rhode Island? That’d be embarrassing. 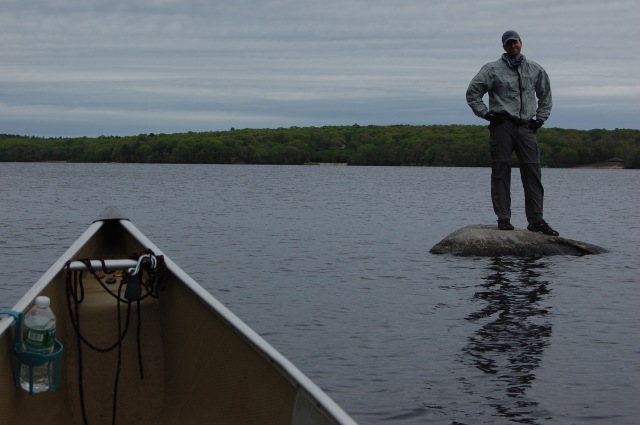 Our tour led us past quaint lakefront properties. A gray-haired man crouched amongst bushes, playing with dirt in his flowering garden, unaware of our presence. I considered giving him a scare, like the geese, but didn’t want to be responsible for startling the man to death (though being a nurse, Trevor could have revived him). We admired the homes,

but I was happy to again reach the undeveloped side. I always imagined Rhode Island would be void of wilderness area, because of the size and age-old colonial settlements. So I was surprised to find that most of Watchaug pond is surrounded by extensive protected forests and wetlands. I hope is stays that way. 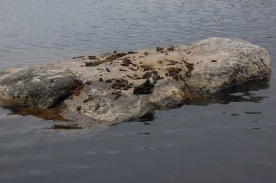 Over the 2 paddles, we had formed a list of questions, so we stopped into the visitor center on our way out. “We saw all this scat on one of the granite rock islands,” I told a younger woman at the front desk. “I’m certain it was mammal poop… real long, almost like twigs.” She said she had no idea, but then lit up. “I can google it!” She proceeded to type ‘mammal poop” into the search engine, as if that was going to narrow it down. While she spent many delighted minutes looking at pictures of crap, we turned to another ranger. “We saw a high flying bird of prey… I think it was osprey: do have lots of them here?” I asked. “Ewww look at that one!” the girl blurted out, pointing at the screen. I turned back to the older ranger. “We have lots of species of birds here.” He responded. Well, no shit. I thought. But, I smiled, thanking both of them as we left. 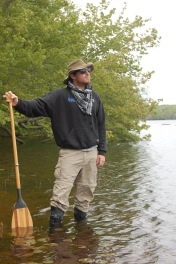 Rain moved in as we sat at a restaurant booth in town, still in grimy clothes and rubber boots. “How far to the next place?” Trevor inquired. “Well, Newport is the east end of the state, so about 35 minutes away.” I answered. The waitress brought big steaming bowls of clam chowder (or chowda, as she corrected), followed by fish and chips, which we devoured. Meanwhile, back in Burlingame, the state employee spent her entire lunch break — I’m sure of it — studying the wide world of mammal feces.