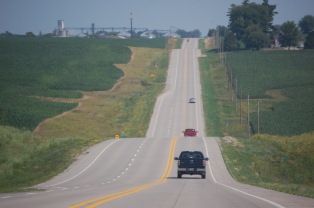 (State #31/50) Somehow, Iowa intrigued me. I’m not sure why, either. Other than the people in Southern Louisiana accusing the state of sending them their pollution (See Louisiana Post), I knew very little about Iowa. My collective knowledge of this Middle America farm state comes from the classic corn and pigs stereotypes, Bill Bryson and the knowledge that it’s where, back in the 1990’s, James Earl Jones vanished into a cornfield with Ray Liotta and a bunch of dead New York Yankees. Other than that, Iowa was a clean slate. 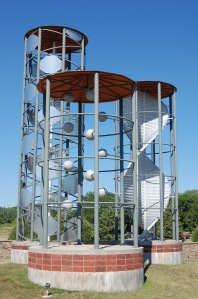 I arrived into a small town named, to my slight concern, Coon Rapids. But, since it was located on a branch of the Raccoon River, the title checked out. Coon Rapids, without trying, immediately charmed me. To my sincere delight, near the towns main crossroads, I found three massive statues of corn DNA… “If you build it, they will come.” Well, I guess I was “they.” I stared up at the massive double helixes, endeared by the ode to corn monuments. Indeed, the town had no issue leaning into an Iowa stereotype. While a physical manifestation of corn was something you might expect to find in rural Iowa, connections with the former Soviet Union was not… But, again, America continues to surprise me.

The story starts with the Garst family: Roswell Garst and the family are legends of Iowa and American agriculture on a whole. The Garst corn empire started on a homestead near the banks of the Middle Raccoon River. Along with being an agricultural innovator (pioneering a new corn hybrid, hence the statues), he was also forward thinking in conserving the native flora and fauna of their sprawling manner. Best of all, Garst developed an unlikely friendship — based, naturally, on corn — with Nikita Khrushchev, the leader of the Soviet Union during the advent of the Cold War.

When Khrushchev toured America in 1959, Garst was the only person, save for President Eisenhower, whom he wanted to meet. So, as the oddities of history go, Khrushchev — the leader of the USSR, our Mutually Assured Destruction adversary — stopped in to Coon Rapids, Iowa to meet the Garst family and stay at the farmhouse. 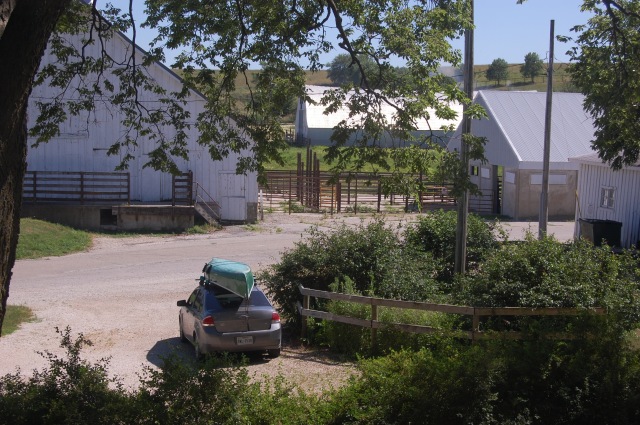 Arriving at the meeting site, I found most of the original Garst farm structures intact. Swallows flew from the eves of white-painted barns, while bison grazed in a sunny pasture. Lofty shade trees, filled with singing birds, surrounded the homestead, which was open as a guesthouse and museum. Seeing no one, I let myself in and wandered around the home.

Inside, I inspected old photos of the Garsts’ and Khrushchevs’ smiling, talking, and embracing. In the dinning room, I studied a shelf of hammer and sickle medals, pins, dolls and a little figurine of Sputnik. Back in the living room, I spotted a bookshelf containing a wide assortment of literature. You can tell a lot about someone by their personal library — if it’s not a great indicator of their true interests, its at least a reflection of what they’d like people to think they’re interested in. There were dozens of books from the mid-20th century about and from Russia. A few were written in cyrillic and had signed inside covers with little notes in a language I can’t read. Atop the books titled Russia in 2010 and Corn of Iowa was A Sand County Almanac by Aldo Leopold, father of modern day conservation biology. After spending nearly an hour unsupervised in the house, riffling through books and Russian trinkets, I decided I liked the Corn King of Iowa for his obsession with corn, conservation and the commies. I headed for the river wondering if the friendship between Garst and Khrushchev and their, lets call it, Corn Diplomacy, factored into our two nations not obliterating the world. 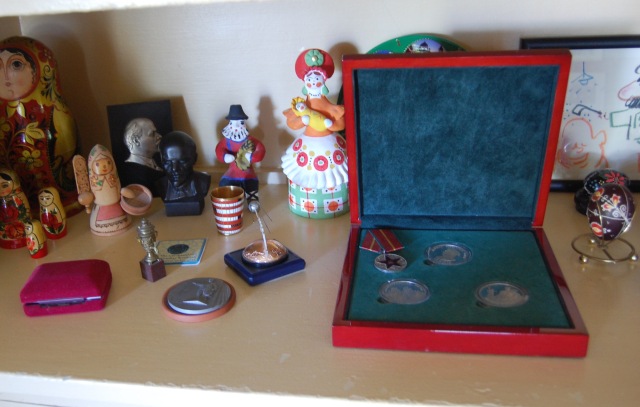 I began down the Middle Raccoon River on a breezy, warm evening. The narrow stream was fast moving, winding and muddy, but lined with swaying tall grasses and arching silver maples and towering, chattering cottonwoods. After several miles it swept against the orange sandstone cliffs of the Whiterock Conservancy (not sure how they confused those two colors). The entire 5500 acre area was donated by the Garst family (including the old homestead museum I explored). They continue to practice controlled burns and sustainable farming practices, hoping the water of the Middle Raccoon flows out cleaner than it flows into the non-profit trust land. And other than finding a fresh trail of empty Bud Light cans leading to a large group at the end, it was a fetching stretch of farmland and wilderness.

I passed by banks of cornfields, tall grass prairies, wildflowers and rolling bur oak savannah, all enriched in color by the early July evening sun. These groves of large oaks were the biggest chunk of oak savannah left in Iowa — the most agriculturally developed state in the Union. The location was also geologically significant in that it was the furthest extent of the Des Moines Lobe, part of the glaciation of the last ice age 12,000 years ago. The river was the boundary between lands to the northeast, flattened and smoothed by glaciers, and the unscathed, rolling topography to the southwest.

I found a few more floaters along the way, enjoying the summer day and wondering why I chose this river to float — I had to keep defending the beauty of this spot to the Iowa’s natives. I spoke to a group of 3 kayakers half way down the river. “Where are you from?” the two woman asked.  “Dallas, TX,” I responded.  “What are you doing here?” they

inquired. “Canoeing all 50 states.” I said. They did not believe me. “John! Is he lying to us?” one asked. “I don’t know and I don’t care.” John called back. I pointed at my state stickers and gave them one of my cards, but they remained untrusting until one looked up my site. “We’re sorry we didn’t believe you!” They called as they floated downstream. I laughed. “You know, you guys are the first people to think I was making it up!” I told them with genuine joy.

I looked for a spot to camp, near the 805 Cabin, where a conservancy worker had suggested. It was a great spot up in the field, but no good place to pull up the boat. So, I made myself a drink and kept floating, seeing no suitable camping sites, until I reached the bridge at the pullout spot. I found the kayakers, Melissa, Tiffany and John, hanging out at a developed site and asked if I could pitch next to them. Less suspicious of me now, they agreed. 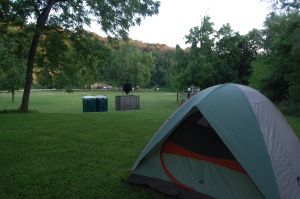 In a celebratory mood (I mean, I was in Iowa, after all) and with actual humans to drink with, I consumed beverages at a good clip. We built a campfire and shared drinks and stories. John was a birder and we got a kick out of a stick on the riverbank, which we all, independently, thought was a great blue heron. I even drank one… maybe two of Melissa and Tiffany’s apple ciders. John offered me a steak and I accepted with little coaxing. Being a polite guest, I devoured it with fire and furry like the world has never seen… or something inane like that. After the girls headed home, John and I drank more whiskey until I felt my fine motor skills diminish into a stumbling slur. I concluded it was time for bed and retired to my tent.

I awoke the next morning to drizzle. I sat up, head pounding and chugged water. Bleary eyed and wobbly, I emerged from the tent to find John sitting at the picnic table. He offered coffee and I inhaled it. Originally, I had planned to walk the 4-mile nature hike back to my car. But now, hungover and with thunder grumbling to the west, I took John up on a ride. I waved goodbye, headed back to fetch the canoe and showered under a hose in the thunderstorm, attempting to wash away the night’s whiskey.

I left town, then the state, when it struck me — I never asked anyone in Iowa why they were sending all their pollution down to Southern Louisiana. And here I had promised the Cajun folks an investigation. But, the Iowans distracted me, lulling me into contentment with their farm houses and corn statues and steak and friendliness and… My God…  ties to Russia… That’s it! I’m calling for a Special Council.