The Niobrara of Nebraska: A Canoe with Uncle Russell 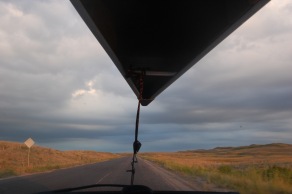 (State #37/50) To be honest, no one expects much nature from Nebraska. Like many states, it isn’t that its undersold, it’s that Nebraskan wilderness isn’t sold at all… Now, I wonder why.

My Uncle Russell and I drove in a two-car convoy, down a blacktop road and into the sunlit Sandhills of Nebraska. We passed beneath a brief evening shower before entering the Samuel R. McKelvie National Forest (an odd designation as it contains about 14 trees). A few miles in, we drove over a cattle guard, onto a rutted sandy track and into a small valley. Stepping over yucca and small prickly pear, Uncle Russell and I hiked up a hill to watch the sunset. To the Northeast, the sun-shower had become an ominous thunderstorm. Unusual glacial blue glowed beneath dark gray as rain bands emptied onto the prairie. But, we all know summer storms track west to east, so we’d be in the clear for the night. Oh, the things we think we know.

We set up the tent, grabbed some beers and strolled along an “Oregon Trail” looking path. By the time we had reached a saddle in the valley, the storm was closer — back-building towards us and growing darker. We gawked as the low clouds pushed overhead until sprinkles sent us fleeing for camp.

Inside Russell’s rental car, we finished our beers as the real rain and wind hit. The storm continued raging from the wrong direction as night fell. I peered through the rain and saw my tent still standing. Ten minutes later, I saw nothing. I confirmed my fears with a

flashlight. “Crap,” I uttered as I stared at a flattened tent. I ran out to survey the damage — the same twice-broken pole had snapped and was now protruding through a foot-long gash in the rainfly. When the storm ceased, we stood over the defeated shelter before digging out our soaked-through sleeping bags. With shrugs, we retired to our separate cars for a lousy night’s sleep.

The next morning we went to the True Value in town where my uncle and the owner discussed the “terrible design” of my aluminum poles (take note REI). We bought 3/8th inch threaded plumbing pipe to use as a splint and repaired the pole and fly in a public park. “After your trip, I can rig you up something, retrofit it with fiberglass poles because it’s going to happen again,” my uncle said. If I ever possess 1/10th of Russell’s handyman prowess, I’d be a satisfied man.

With the tent repaired, the cooler loaded, we put in the Niobrara River on a hot, sunny afternoon. The river was deceptive — we crashed into rocks beneath the green/brown water. Furthermore, the cut banks often had a sandbar where I’d expect a deeper, faster channel. We nearly got stuck on one under Buffalo Bridge, calling to question my already feeble grasp of stream geology. Yet, we got the hang of the river after a few miles and could focus less on the mechanics of canoeing and more on the scene we floated through. 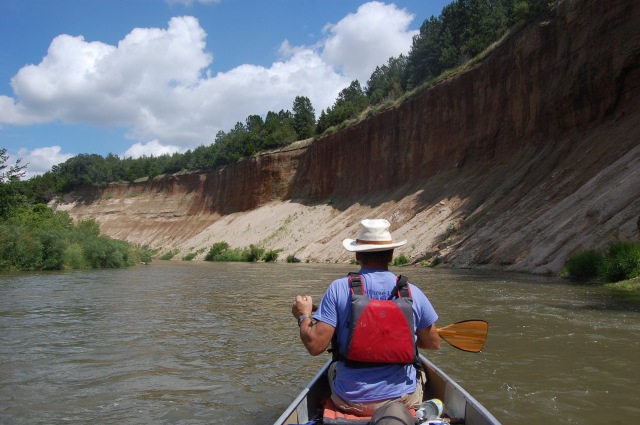 The Niobrara flows between high sandstone bluffs covered in pines and oaks with aspens growing in the hollows. Bison, elk and mountain lions still roam the river valley. Spring-fed waterfalls pour in, draining the Sandhills to the south. We made our first night’s camp near the “Highest Waterfall in Nebraska” and were impressed, as that title brings to mind a five-foot trickle. In reality, Smith Falls is a sixty-foot downpour over dark igneous rock. It wasn’t a waterfall by technicality, it was a freaking waterfall!

We didn’t get on the water until noon the second day. There was no hurry as the river propelled us forth at a three mph rate. By mid afternoon, we watched the bottoms of “fair weather” clouds grow steadily darker. “We’ll be fine as long as they don’t start holding hands.” Uncle Russell declared. As we paddled on, passed more cliffs, pines and waterfalls, holding hands is exactly what those clouds did — filling the gaps of blue sky and turning darker on all horizons. By the time I hopped out of the boat to swim near a waterfall, thunder was rumbling.

I climbed in the canoe and we paddled as the storm in front of us grew and, again, back-built. Bits of cold rain fell and wind picked up as our boat came around a turn into a small section of rapids. “Damnit!” I yelled, “the wind is drying out my contacts… I can’t see much.” Through blurry vision, I saw the beach for Rocky Ford Campground, our destination for the night. Lightning bolts fanned out across the sky as we stroked at full tilt towards the landing. Once we reached the sand, we got out and, for the second time on the trip, ran for shelter. Yet, few days of canoeing end with such drama — lightning, rapids and cussing at the wind. It was great. 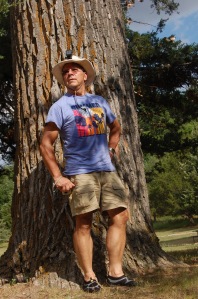 We hung out at the camp store, on the fringe of the storm for an hour, watching rain bands vanish the hills and dark pines to the east. Winds blew dust from the road where raindrops didn’t matt it down. Eventually, the evening sun replaced the storm threat. With drinks in hand, we promenaded around the campsite to people watch and take in river views from higher ground. Russell told me old stories from our country place about the long-gone old timers. Some I’d heard and loved hearing again, while a few were new to me. Uncle Russell, along with being Mr. Fixit, is a natural storyteller; whether it’s an account of “Dale, Dean and Rus-Sill’s” childhood in the South Pacific, college rafting trips down the Salmon River or tales of the old ones from near our country place, I challenge anyone to not listen with intent and enjoy his stories.

The next morning, after our coffee and egg/sausage burritos, the Niobrara carried us towards Egelhoffs Rapid — a solid class II. From our vantage, the stream simply dropped off; white spray shot up from the looming unknown. In a snap decision, we executed a sliding, 180 degree stop into the left bank, right before the point of no return. Russell and I walked over and studied the twenty-foot-wide, two-foot-drop rapid into a deep and swift moving hundred-yard-flume. It looked easy to do right, but also easy to screw up. Either way, we concluded, it’d happen fast.

Back in the canoe, we tightened our life vests, dropped to our knees and flew towards the dead center of the mighty rapids of Nebraska. Uncle Russell and the bow dropped into the shoot and the stern and I bucked up and followed. I felt slight panic for a moment as the canoe rocked side to side. Rider stabilized, but then nearly clipped the left wall; we missed the tip-inducing collision by a hair. When the water slowed we pulled over and celebrated the mix of mild danger and exhilarating adrenaline. “There wasn’t much room for error!” we agreed, happy we scouted it out.

From that point the action fell as the Niobrara widened into and braided stream consisting of shallows, sandbars and slim crisscrossing channels. Park Rangers and locals had warned us about this five-mile section. Apparently, when the river’s low, your float becomes a drag, if you will. However, we only had to get out to drag five times. This was likely less to do with my way-finding abilities on the river and more likely due to the extra water from recent rains. We took out before the boring section became too interesting at the Norden Chute, a class IV of pant-shitting furry.

I can’t speak for Uncle Russell, but I’d think we’d both give the river our Straw Stamp of Approval. After canoeing thirty miles of it, I can say the Niobrara isn’t a National Scenic River by charity, it’s a National Scenic River by merit. With hair-raising rapids, western wildlife, spring-fed waterfalls, wide valleys and forested cliffs, it seems like a place that should be known to more outdoorsy Americans. But, perhaps, Nebraskans don’t wish to sell this river to outsiders. Perhaps they’d prefer to keep this unlikely wilderness for themselves. If that’s the case, I can’t blame them. 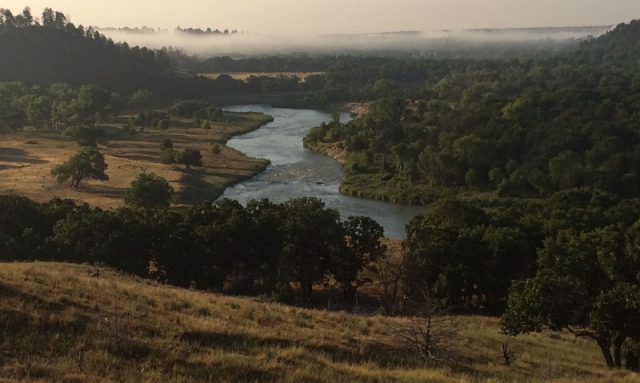 Russell took this early one morning near Rocky Ford, while I slumbered in the tent…

1 Response to The Niobrara of Nebraska: A Canoe with Uncle Russell