(State #44/50) Nevada fascinates me and little of that fascination stems from the bright light gluttony and celebrated debauchery of Las Vegas. For me, the appeal is in the landscape. Looking at a topographical map, you’ll notice the state’s terrain is a series of north/south running squiggles. On the ground these squiggles become high, forested ridges separated by wide, sweeping valleys coated in sagebrush — mountain islands floating upon the desert sea. This is basin and range country. This is what draws me to the state.

Nevada’s terrain, though enchanting, doesn’t lend itself to canoeing — most of the state’s rivers are dammed up or described as “disappearing” and “stinking.” Yet, near Reno, the Truckee River flows out of Lake Tahoe and north into a terminal basin. There, the high mountain rain and snowmelt empties into a deep depression in the desert, set between mountains, forming a natural body known now as Pyramid Lake.

Driving through Northern California, I traded smokey air for triple digit heat as piney hills gave way to The Great Basin. Blue sky became visible and the mountainsides, once reduced to varying shades of gray, now bore detail. Crossing the border, there was no grand sign declaring “Nevada!” The blacktop just turned into undeveloped road at the state line. As I entered Paiute Land, a road closed sign and a concrete barricade appeared, partially blocking the road; red spray paint declared “R.D. Washout. 7/17. Turn Around.” I checked the map… long way to turn around. So, I trucked on, betting, hoping that they’d repaired the route since July. I lucked out and drove a bumpy, yet maintained gravel road, which passed above shiny new culvert pipes. Then, over a low ridge, beyond more baking sage, appeared the great inland sea of Nevada.

After procuring my permit from the marina, I met a shirtless Paiute guy named Primo, who runs a kayak business. He suggested the best place to camp in solitude and warned me about the lake. When I asked about canoeing across to the Pyramid Rock, suggesting it was only a couple miles, he laughed. “Who told you that? It’s more like 10 to get across. People will disappear when they paddle out that way.” Primo said. Pointing at the map, he showed me where authorities rescued a pair of jet skiers the previous afternoon. “Oh,” Primo continued, “that north wind can come out of nowhere. So, if you see the water bubbling, you get to shore.”

Beyond the hazards of reality, we discussed older fears rooted in Native American legend; Red-haired, cannibalistic giants (Si-Te-Cah) roam the desert and Water Babies  haunt the lake. The latter are said to be the spirits of ill-formed babies thrown into the lake, which sometimes enact their revenge by dragging the living down into the salty depths of Pyramid. “I think it’s mostly to stop kids from swimming at night,” Primo told me. “There’s sudden drop offs close to the beaches where people disappear.” 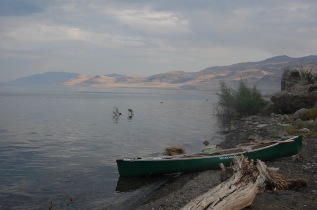 I parked my car at the Monument Rocks camp, where Primo had suggested. With the heat of the day subsiding, I launched my canoe and headed north, towards the Needles formation. As south winds picked up, I had a sudden feeling I’d been here before. Then it hit me — this lake in Northern Nevada reminded me of Lake Issyk-Kul in Kyrgyzstan, Central Asia. An odd notion at first, but then I realized both are at similar high elevations, in arid/semiarid climates, ringed by mountains and are endorheic,* salty seas far from any true ocean. As Alexander von Humboldt noted over two centuries ago, latitude and elevation link distant corners of the globe, lending to similar vegetation type, climate and environment; the deja vu was more than superficial. 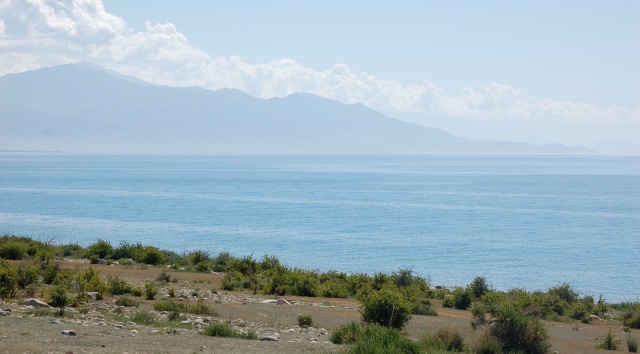 Paddle in my lap, I pondered atop my duct tape seat as the wind pushed me northwards. The evening sky was a mix of distant smoky haze, unobstructed atmosphere and gray-bottomed clouds, dropping bands of rain that never reached the ground. Sunlight blotched the mountains to the east at random, while a rainbow formed across the lake. The sun took turns illuminating the protruding, craggy Needles to the north, turning them a blinding white.

Along the waterline, a patrolling coyote caught my eye. The narrow-faced, big-eared canine slinked along shore, stopping on occasion to look my way. Pelicans, gulls and ducks, disturbed by my presence, filled the moody sky as I let the breeze carry me to shore. I poured a drink and traded off scanning the land for wildlife and watching the clouds and sun play on the lake.

The waves grew larger on my return. Remembering Primo’s advice, I paddled only a stone’s throw from shore. Rollers were constant and Rider pitched up and slammed down in the troughs, sending up spray to wet my face. I felt experienced. I felt mildly badass. But, knowing cockiness leads to mistakes, I kept focused. I reached the rocks as the white-tipped waves ramped up to the highest I’ve canoed. Timing my beach landing between sets, I exited the lake in a hurry.

I set up my tent twenty feet above the lake in the last lingering light of day, not used to eight o’clock nightfall. Waves continued to crash on the lava sand beach below, where bleached white uprooted trees lay fallen in the surf. Crickets and insects hummed as the night set in, pleasant but not yet cool. The waxing moon rose from the south, where the wind originated. Clouds framed the Big Dipper to the north in the only large patch of dark sky. A few cold drops rained down on my bare shoulders — the leftovers from storms formed over the Sierras.

Peering out from a southern overlook, a few stars blinked above the horizon, beneath the veil of a dying thunderstorm. Below that, I saw the far-off lights of Sutcliffe. The near-full moon, however, was master of the scene, dominating the early September sky. The waves on Pyramid Lake scattered its reflections, creating a bright, glinting chasm of moonlight, which stretched on for miles. Strong gusts created finer ripples upon the surface, which swept across the lake and advance towards shore until the warm breeze met my bare skin. Above the wind, I strained to listen, but couldn’t hear any crying demon babies. Still, I had no desire for a night swim.

The cool, pre-dawn air vanished the moment the sun rose over the mountain. I awoke in a pool of sweat and fled the tent. The songbirds and desert cottontails retreated to shade, ceding the open ground and air to the scurrying lizards and circling vultures. I got on the water and canoed towards the Willows, where an osprey perched on a dead tree and a herd of cattle grazed the beaten down ground. After my morning paddle, I made pancakes in the shade of the rock, picked up the littered shards of glass around camp and drove off in my small pocket of AC.

Back at the marina, I ended up talking to Primo and his German wife for several hours. We hung out in the shade of their large tent and discussed topics spanning from wilderness survival to politics to poetry. Primo was an army veteran with pride in his Paiute heritage, but also with disappointment in how his community now regards nature. “Heck, you’re more Native American than most of the people around here.” Primo told me. I was flattered, but also saddened. All groups in the country, it seems, struggle with maintaining real connections to their land and the natural world.

Before I left, Primo lit some cedar incense he’d collected in the mountains. He gave me some as a parting gift and I wished them luck on their new kayak business. Driving on towards California, I left Pyramid Lake and the Great Basin behind with two contraband-like baggies of incense, a hundred photos and a strengthened fascination with the state of Nevada.

*An endorheic basin is a closed drainage basin, which retains water and allows no outflow to other external bodies of water. So water flows in and only leaves through evaporation (or through pumping for irrigation in the modern age… Poor Aral Sea).