Katie, California and the Ghost Canoe of Morro Bay 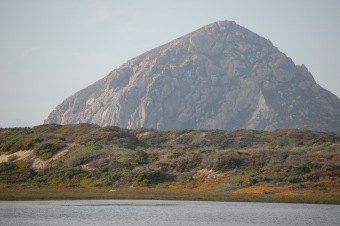 (State #46/50) Morro Bay is an odd town. It’s certainly not Bakersfield, but it’s not Big Sur either. This coastal community is somewhere in between — an agreeable mixture of blue collar and boutique.

The waterfront is awash with life. Tour boats patrol and kayakers meander while paddle boarders school together for protection. Sea otters barrel roll atop kelp beds, sea lions laze on floating docks and spotted harbor seals surface for quick glimpses of the above-water chaos. Three smokestacks of a closed 1950’s era power plant tower over the town, while Morro Rock, the 581-foot monolith, guards the entrance to the bay. Together, these landmarks, natural and manmade, reign over the surrounding beaches and waterfront bistros. 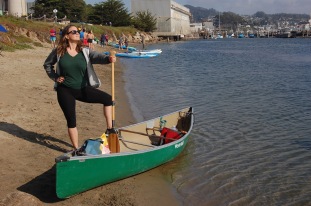 I overlooked it all from a bayside park, waiting for Katie. My longtime friend was driving up from Los Angeles where she works in the moving pictures. As teenagers, Katie was on my first multi-day Current River canoe trip. Back then, when not foraging in caves, she thrived in mud fights, cliff jumping and in developing our unique sense of humor. To this day, we never fail to entertain ourselves. And though we haven’t lived in the same town since high school, she’s remained one of my closest friends.

When Katie arrived in the late afternoon, we hit the bay and paddled towards Morro Rock. Our first point of interest was a raft of basking sea otters. With their white fuzzy faces, whiskers and tiny paws, they appeared more like living stuffed animals than wildlife. I tried to count the delightful creatures, but the damn things wouldn’t stay still — never have I seen animals so energetic in their apparent relaxation.

We turned around at the choppy mouth of the bay. Passing a group of paddle boarders, I had the urge to canoe into the mob at full speed, sending as many diving and scattering into the water as possible. I refrained from the unnecessary attack and settled on a picture. I figured having Katie in the front of my boat gave me a little extra latitude to be the shirtless, bearded creep with a camera. Still, I wasn’t about to point my lens at one of the bikini-clad women. Instead, I photographed a nice young man, who stared at me in confused amusement.

Reaching the calmer waters protected by a several-mile long sand spit, we cracked open Tecates and canoed into a sea lion village. We kept wanting to jump in and squirm around with them, but we recalled the lesson from Arrested Development about swimming with loose seals. Keeping both hands intact, we cut between rows of anchored sailboats and weaved through kayakers traveling with the tide. 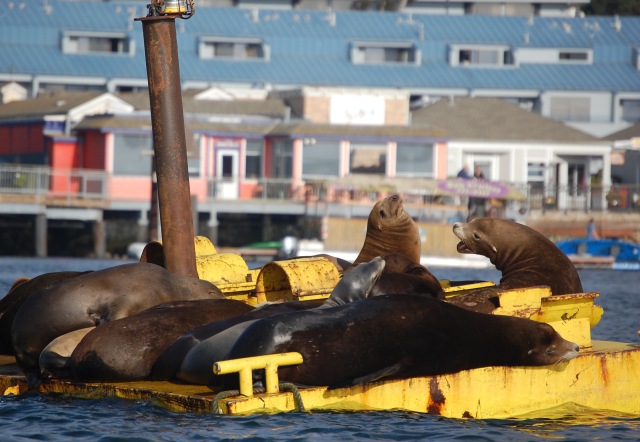 Towards the estuary, the bay widens and the sand dunes on the peninsula grow higher. Only barking sea lions and calling gulls pierce the salt-thick air. The background hum of tourism subsides and the sound of the distant, crashing ocean exists at that almost imperceptible level of putting a shell to your ear. Civilization is still visible, but a mile and a half from Morro Rock, nature regains dominance.

The peninsula became our port of call as my bladder demanded we make landfall. We jumped out and I pulled Rider halfway onto the sand. I looked around for trash as it happened to be California’s Coastal Cleanup Day, but couldn’t find much (it seemed the annual event was working). Katie and I took our beers, a bag of chips and journeyed into the dunes, with no fixed destination. To our left was the Sahara of coastal California. To our right, the evening light shone through the sea haze and lit the grand rock face. We trudged up the high dunes until we gazed upon the greater Pacific — white foam waves curled onto an uninhabited beach. Katie and I sat down in the sand, talked, drank and ate BBQ chips.

At length, I stood up and surveyed Morro Bay. Something stood out in the water. My mouth opened wide as it sunk in. Katie saw my face and looked out, too. “Ohhh Nooo!” I cried. Out in the bay, already a hundred yards from land, my green canoe drifted, unmanned. I began laughing as I ran down the dunes, Katie following behind, laughing as well. After forty-six states, she’d had enough; Rider was trying to escape.

I wasn’t worried about getting my boat back, eventually. The question was when and whether I was going to have to swim for it. Approaching the water, I saw kayaks, canoes and lit grills. Two women poured wine on a red cloth-covered folding table. A few dozen people milled about, sipping California red, enjoying the fleeting sun while watching, with vague curiosity, the lone, drifting ghost ship of Morro Bay.

To my delight and shame, I spotted a kayak making a beeline for Rider. I slowed my run and handed Katie my empty beer. “I might not want to be holding this when I meet this group.” I said, thinking of all the probable judgement. “Is that your boat?” a man asked. “No, it’s not mine, but whoever’s it is must be mighty embarrassed” I said before telling the truth. Katie walked over, still laughing. “Katie, I told you to secure the canoe!” I said, trying to pin it on her.

Though it wasn’t a formal affair, I felt a tad self-conscious as the other humans mingled about in clean clothes, drinking wine, while Katie and I stood there panting, covered in sand and holding crushed Tecate cans and a half-eaten bag of off-brand BBQ chips. Instead of judging from a distance, a woman named Mary approached us and offered us wine from Lone Madrone vineyard. We accepted. Katie and I toasted as a man in a kayak towed my canoe in by a tether. Both red blends were fantastic and not just in comparison to cheap Mexican beer. Sometimes life isn’t fair in a good way.

Not wanting to meet the kayaker retrieving my canoe with wine in hand, I asked Katie to hold my glass. To my surprise, the man didn’t scold me or lecture about the tides. He seemed genuinely happy to help. I thanked him, still ashamed of my rookie mistake, but more so in explaining I was at the tail end of canoeing all 50 states. Again, I didn’t detect judgment. “We watched it for a few minutes,” he said, “and thought maybe someone was napping at the bottom.” It was only after a seagull landed on the bow that they realized it was unoccupied. We posed for photos, finished our wine, thanked our hosts and returned to the bay.

That night we enjoyed a lively dinner at our beachside campground until the neighbors shushed us from their RV window for being too loud. I’m sure we absolutely were, but it was 9:05 on a Saturday night. “How many eggs do you think you’ll want for breakfast?” I asked Katie. She was confused. “Let’s say two apiece, so that gives us eight to throw at their camper… When they come out, we’ll be sitting here and say, ‘Oh man, those damn kids on their bikes, we wanted to yell at them to stop, but ya know, we didn’t wannabe too loud.”

Instead of shelling our neighbors, we walked down to the beach, where the Pacific drowned out all our laughing and outbursts. We sat atop shemaghs and fixed drinks from the cooler. With no moon and low light pollution, the stars shown bright and a few fell over the ocean. We joked, talked and found brilliant solutions to most of the world’s problems as the thin white lines of the surf grew together, dissipated and reformed out in the black sea.

When writing this piece, I asked Katie if she remembered any quotes from our float. She thought about it before responding, “I just know that there was a lot of discussion around how sexy the otters were.” Yeah, I thought, that about sums it up.

2 Responses to Katie, California and the Ghost Canoe of Morro Bay