(State #48/50) Across the mesa and through the arid grasslands, I traveled before halting at the edge of a cliff. Beneath my wheels, a red clay road zigzagged down, coursing the steep walls of the canyon as it descended eight-hundred feet to the Green River. Recent rains left the narrow switchbacks slick and there were no guardrails to forgive a momentary distraction. I creaked down Mineral Bottom Road with uncharacteristic caution, both sweaty palms wrapped around the wheel and my vision fixed on the wet surface before me. That morning my car had passed the 22,000 mile point of my canoe trip and there was no contest — this was the most butt-clinchingly scary road I’d encountered.

In 1974 my Mom rafted down a technical stretch of the Green with her best friend, Diane. The young ladies were escorted by a collection of what were surely buff, tan, tiny-shorted, pot-smoking outfitters. According to her, they’d met them the previous winter… at a bar… in Vail. All together, ingredients for stories involving one’s Mother that you hope to never hear. Still, I pried a bit.

“They were smoking dope, which worried me a little, but they were excellent on the water,” my Mom explained. “Once we were going so fast towards this wall. I thought we were going to die, then they turned at the last second. Oh! And I had a crush on one of the guys,” Mom continued to my unease, “but he brought another girl along.” Thank God. Not only did this other girl reduce the awkward story potential, but she also helped ensure my future existence.

My first visit to the area came thirty summer’s later when, in 2004, three friends and I embarked on a high school graduation road trip. We broke down in Arches NP on our first day in Utah. Waiting on van repairs, we slept one night under a gazebo in Moab’s city park… with a drifter… until the sprinklers came on at four a.m. The next day we hitch-hiked to

Arches in the bed of a truck driven by a long-haired fellow named Mark. Afterwards, he deposited us at the Lazy Lizard Hostel at the edge of town. Mark, being a righteous dude, bought us some cheap beer and wine coolers, much of which ended up, along with the night’s dinner, on the ground outside our cabin. Those few days had to be the best of the entire trip.

Arriving in Moab in 2017, I stopped at the Lazy Lizard out of curiosity and nostalgia. As always, the communal room buzzed with an assortment of old hippies, seasonal workers and Europeans. It’s the sort of atmosphere where someone might start reading poetry aloud or turn the contents of the free food bin into chicken potpies for all to enjoy. I’ve witnessed both. That night, one drink turned into many and I found myself wandering into town, coerced by a group of rowdy young lads. After an impulsive stop for tacos, the journey ended in an empty, lifeless bar. It was anticlimactic, but at least no one puked up red wine coolers.

The next day, after negotiating the treacherous canyon road, I caught my first glimpse of the Green River — brown water flowing beyond a verdant thicket. I launched on a chilly, cloudy afternoon and immediately understood traveling up the Green would be more difficult than the Colorado. I canoed across the river to an inside turn, where I assumed the current would be slower. It wasn’t. Against a bank thick with salt cedar and willow, I struggled at a one-mph pace, unable to take a break. My pores leaked cheap beer as I crawled up the river, between the towering tan walls of Labyrinth Canyon.

This muddy river was channelized, lacking sandbars, with little difference in flow rate between the inside and outside bends. I hunted for eddies behind boulders where I’d build up momentum to pass over the swift water pouring around the obstruction. I’d stroke at the current with little resistance, almost stalling before creeping into the next slow portion. On and on, this repeated.

To make matters more irritating, I passed multitudes of happy down-streamers. “You’re going the wrong way!” Every. Single. Group of floaters shouted as they paddled with ease by me. We all had a good laugh until, about the fifth time, I pulled out my six-inch knife and repeatedly punctured one of the rafts. The occupants fled overboard as their watercraft went limp and submerged. “Anymore knee jerkers?” I asked the wide-eyed, ashen-faced members of the sister vessels. “Didn’t think so,” I said before wiping my nose with my arm still gripping the open blade. Then I let the knife drop to the bottom of my canoe and continued paddling up river, the right way.

Dark fantasies behind me, I pulled Rider onto a muddy sandbar at the mouth of Hell Roaring Canyon. I walked up the arroyo to stare at an etching of a boat, a faint eyeball with wings and the script “D. Julien, 1836.” A French-American fur-trapper, Denis Julien was the first European of record to enter this land. He was white and traveled up stream, but that’s where our similarities end. Julien entered this unexplored canyon unsupported and alone nearly 200 years ago — I can only imagine. And there I was, muttering about my difficulties in a boat filled with a GPS enabled phone, computer, butane stove, synthetic tent and supermarket fried chicken.

The clouds broke and the warm colors of Labyrinth Canyon deepened as I made camp above the river. Tall grass, long-needled prickly pear, sage brush and fruiting persimmon bushes occupied the flat shelf around my tent. A boulder field of decaying canyon wall lay thirty feet away at the base of the mighty cliff. Beer in hand, I took pictures before stepping on a cactus; two-inch white thorns went strait through my sole. I hobbled back to grab another beer and preformed an evening tweezer surgery.

Bats chirped and the mosquitoes turned to prey as the first stars appeared behind the clearing, high autumn sky. The ceiling dimmed westward, color drained from the landscape and the canyon walls went dark. With no fire,* I fled from the chill and went to bed. 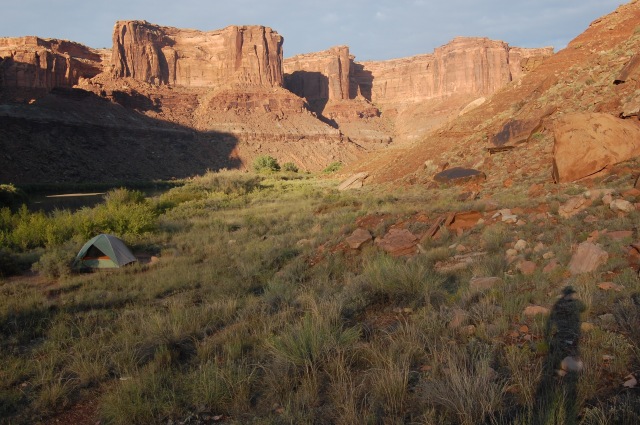 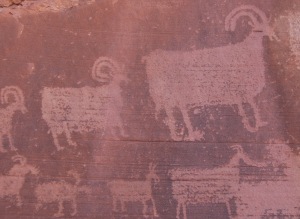 The next morning, I canoed up to Horseshoe Canyon, landed my boat and trudged through a jungle corridor. Sun-cracked clay, saltbush and tumble weeds met me on the other side of the thicket where I found the petroglyphs carved by the Fremont Culture (500–1275 A.D.). There were herds of bighorn sheep, antlered deer, dogs and people. I tried to imagine the artist carving them. Perhaps for spiritual purposes. Perhaps out of boredom. Perhaps to take advantage of the shade and breeze on a stifling day. What I do know is that these petroglyphs have survived a thousand baking summers and a thousand freezing winters. They’ve withstood the Spanish explorers, the French trappers and, so far, the Americans. If they can make it through the Trump presidency I’d say they’ll have a real shot at another millennia.**

After the easy paddle down, I pulled off the river, got in the car and drove towards the great switchbacks. Movement on the cliffs above interrupted my thoughts of a hot meal in town. I looked up through my windshield as a man stepped off a ledge and onto a line. I stopped and exited my vehicle to gawk in silence. Arms spread, feet shifting back and forth with the slack line, the man took one careful step at a time. He maneuvered for balance, walking hundreds of feet above the empty desert air. I remained quiet, fearing any noise might cause him to lose concentration and, well, I wasn’t that desperate for his wallet. Eventually, he reached the far side totally unaware of his one-man audience. Satisfied with my key role in his safety, I patted the upside-down canoe, got back in the car and drove up the steep, red road and out of the canyon. Across the plateau and through the high grasslands, I traveled onwards to Moab, which, in my experience, is never a bad direction to head. 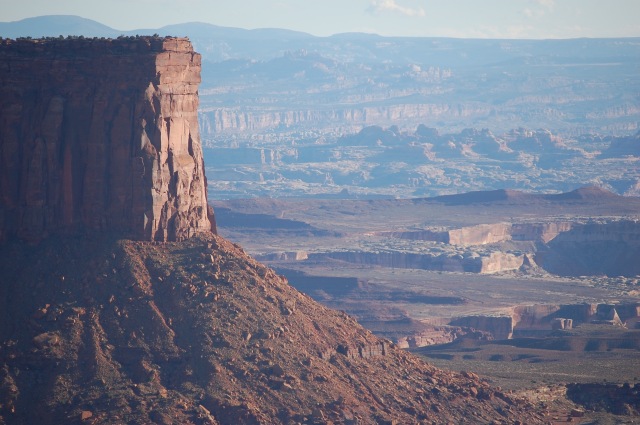 *Before beginning my paddle, I spoke to a ranger at the Mineral Bottom launch. He was friendly, but went over my signed BLM permit with me and pointed out the many ways I was not in compliance. Like many legal documents, I signed without reading the form. He knew I was honest in my ignorance and let me go, making me swear I wouldn’t make a fire without the required fire pan (fire scars can and do last generations in the Southwest and other environments). I was also supposed to have a throwable floatation device, as required by Utah State law. He seemed less concerned with this one as I didn’t have another passenger to rescue. Finally, the rangers gave me an extra wag bag, for crap, as there are no pit toilets on the Green River in that section. With all of the floaters, they don’t want the river turning into an open sewer. All made a lot of sense and it was a bit embarrassing as I am no stranger to canoeing and various restrictions and rules. Still, it goes to show, there’s always more to learn. I’d say always read everything you sign, but let’s be realistic. Just always be sure to ask about special restrictions and research must-haves for any float.

**The Trump Administration recently reduced the area of two National Monuments in the State of Utah. The President cut Bears Ears by approximately 85% and Grand Staircase-Escalante by around 45%. Western land use and ownership, especially when it comes to the US Government, will always be a contentious issue. Many praise the decision as reigning in federal overreach while others scorn the decision, arguing that it will open up the land to development and exploitation. It’s complicated.

I bring it up because much of the nearly two million acres, which Trump de-monument-ified (let’s pretend that’s a word), contains a vast array of petroglyphs (like the ones I saw) and historical artifacts from the Fremont People and other ancient cultures.

Personally, I love American public land and how could I not? Public lands allowed me camp, hike, explore, canoe, often for free, all around this nation. I come from a state that has around 2% public land and, well, it sucks. Human history is filled with regrets of all the places, peoples and environments we could have protected. I struggle to find examples of the times we look back and say, “thank the heavens we opened that land up to small herds of cattle, development and natural resource exploitation.”