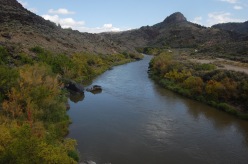 “We will be nearly finished, I think, when we stop understanding the old pull towards green things and living things, toward dirt and rain and heat and what they spawn.” — John Graves

State #50/50: Caught between seasons, my Dad, Uncle and I stood on the banks of the Rio Grande. The dying glow of autumn leaves beamed from the riversides while large summer-like thunderheads billowed and grew and grumbled above the gorge’s 700-foot walls. A fuzzy tarantula scurried upon sun-warmed stones, away from our shadows. This is still summer, I decided. Russell watched from shore as Dad and I launched into the flowing water, into my final float.

The Rio Grande is quite a river that, I’m afraid, we’ve made quite a mess of with dams, water depletion and water pollution (name something that shouldn’t be in water and it’s in the Rio Grande). After cutting through mountains, deserts and canyons, it now barely reaches the Gulf of Mexico, petering out into a muddy ditch between two nations. Hardly a glorious end for a grand river. And yet…

This river still commands the scenes it travels through. It’s commanded my attention since I was a boy, wading across the Big Bend, feet sinking into the slick warm mud. In college I paddled through Boquillas Canyon with my brothers and cousin Wesley. We spent four days floating the borderlands and sleeping under the star-laden skies. One night, for the hell of it, we held an elaborate sandbar ceremony, complete with makeshift torches and nonsensical chanting. The bonfire cast yellow light on our half-naked bodies, decorated in dead plants and river-trash, as we danced to the beat of an overturned canoe. The river had no choice but to watch.

The next day the Rio Grande put on her own display, albeit with more subtlety. We stood on a rocky ledge hundreds of feet high. An enormous gulf of open air hung silent and still between the mammoth walls of stone, above the brown string of water. Tiny green canoes passed beneath us, minor details amid a sprawling canyon. She made her point.

A decade later and hundreds of miles upstream, the Rio Grande maintains its dominating presence, filling the gap of a failed rift valley, dividing two lava-rock rimmed plateaus. The turbid Rocky Mountain runoff carried Dad and I along lengthy slow stretches separated by runs of tidy chutes and swift rapids. During the lulls, we watched the edge of a storm skirt the canyon, hesitant to cross the great divide. Upstream, a massive cell developed over the unseen mountains near Taos, framed by the v of the valley. 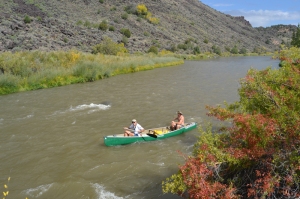 We passed mahogany cliffs, orange oaks and crimson creeper vines. Then Dad noticed something in the bushes, downstream. “Hey, there’s Russell!” And there he was — waiting in the shrubbery beside a rapid, camera in hand, prepared to capture every detail of the disaster. We jostled through a class II, white bits splashing up from the brown, but didn’t give my uncle the satisfaction of a good swamp. 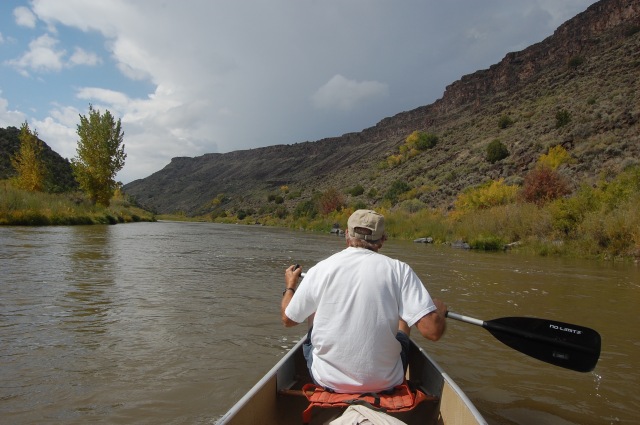 Beyond, the flow slowed to a stroll and the valley walls drew closer, bringing the dark basalt boulders and stunted junipers into fine view. I scanned the slope for a particular animal. It paid off. “Dad, zoom in on the left, a hundred feet up, something white.” He saw it too and his photos confirmed — a Bighorn Sheep!

As we admired the young ram, a much smaller creature appeared much closer. Grasping leafy greens beneath its whiskers, a muskrat executed the joyful toils of the world’s most adorable swimming rat (with nutrias coming in a distant last). Oh, that old pull.

A few miles downstream, Russell reappeared along the banks of a campground. We landed, claimed a site beneath a large cottonwood and devoured a picnic lunch. Afterwards, we fanned out across the gorge’s west-facing slope. Though not the wisest, we separated and bushwhacked at our own pace, picking our way up loose gravel, scrambling skywards with no real goal.

I hadn’t intended to reach the top, but soon noticed a climbable gap to the summit. I crept up, boots sliding on the unstable ground, hands grabbing warmed igneous rocks and juniper snags until I pulled myself up on the rim. A flatland of sagebrush stretched eastward, interrupted only by a ranch house, then terminating at the foot of a low, forested mountain.

The green string of the Rio Grande snaked the course of the canyon before vanishing in a blinding glimmer. Directly below, the campsite, the cars and the drying, overturned canoe locked to the fire pit were tiny and remote. The opposing canyon side was strewn with rockslides and sizable boulders, pausing on their downward journey. Living things grew where they could. A volcanic peak on the plateau, half shaded by clouds, broke the horizon. Like many views out west, you could stare for hours. An endless study of detail.

A golden eagle, riding the mid-afternoon thermals, flew along the cliff edge. Moments later, an osprey soared past on the same line. I scanned the valley for my family — a live action Where’s Waldo? of the Southwest — and found Dad a few hundred feet down. He sat atop a large rock, legs spread like a toddler in a highchair, enjoying his own bird’s-eye view. A minute later I located my Uncle, side-stepping his way down with a blue trekking pole. The scroll, as usual, remained lost. I took in one last grand view of the empty air and left the raptor flightpath to returned to my kin.

Back at camp we cracked open beers, set up our tents and watched another storm pass us by, thundering all the way. The sun dropped. Still warm, still more summer than fall. Rich colors lit the rock faces and the sky grew golden as the clouds absorbed the evening. Eagles, distant and dark, glided above the far off reaches of the gorge.

With beers in hand, we walked along the road until we overlooked the sky in the flowing water below. The junipers and the rocks dimmed and dulled, but the yellow-greens of the banks continued to glow in the fading light.

I spotted something swimming downstream. As it emerged from the water, a massive mammal took shape on the sandbar. “It’s a bear!” Uncle Russell shouted. For a moment, I believed him. But, it was just the biggest damn beaver I’d ever seen. We laughed, maybe too much; the beer was working. 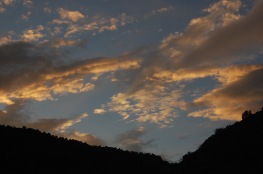 Bats replaced the birds as I lit a fire at camp. We grilled sausages and watched the stars and planets appear between the clouds. A near-full moon rose from the southeast, radiating soft, white light upon the cliffs. I pulled out my guitar. Russell and I took turns strumming. He played M.T.A., a 1960’s Kingston Trio tune, and we all sang along, laughing about the fate of poor old Charlie. “Well, did he ever returned? No he never returned and his fate is still unlearned…” What an absurd, wonderful song.

The next morning, a blanket of gray drizzle ushered in autumn; the Summer of ’17 was over. Yet, we still had one more stretch to paddle and that last morning of my Canoe50 Campaign was no lazy jaunt to the finish line, no smooth falling action preceding the credits. The Rio Grande demanded our respect and attention to the last stroke and we gave it. 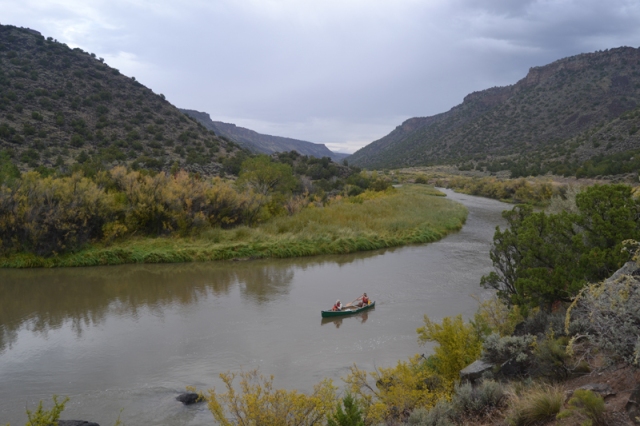 Rapids, churning cold water, poured over the gunnels, forcing Dad and I to stop and dump the canoe. On the last quarter mile, a busted down dam led into an extensive run of whitewater that, if done wrong, could spell a flip. I steered us right, shooting down little haystacks and bumping over rocks. Dad called out directions while I dropped to my knees. The swift current kept up as we cut across the channel, navigating the river at a thrilling rate.

The fall colors and widening valley blurred by our periphery. We flew into one last swift shoot, rocking over standing waves. Then the Rio deposited us into a calmer channel. We looked up and spotted Uncle Russell at the landing. I ran Rider aground, hopped onto the shore, steadied the boat and Dad followed. State #50, complete.

We all took photos, shook hands and hugged. What I began with my Dad in March, I finished with him in October — with 23,000 road miles, 500 canoe miles, 48 states and 6 months in between.

Drizzle turned to rain, spattering the bottom of my canoe, as I fastened it atop the roof rack. Feeling obligated to perform one last meaningful gesture, but lacking any good ideas, I walked to the riverside where I cupped water in my hands, tossed it skyward and let the globs rain down upon me. Satisfied, I got in my car and we drove out of the canyon, heading eastbound to Texas, heading towards the horizon, heading home.