About My Canoe 50 Campaign 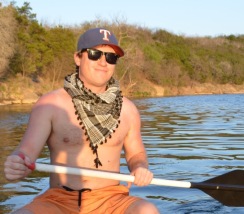 Mission Statement: I plan to canoe a body of water in all 50 states over one long summer of ‘17. I’ll camp a night alongside each river, lake, swamp or lagoon that I paddle. I’m doing this for me, the adventure, the time in nature and to raise money for American Rivers https://www.crowdrise.com/canoe-50-campaign, which is a group that shares my love for environmental stewardship. My Instagram handle is ericwstraw, feel free to follow.

About: A German guy once told me he was going to name his boat, Eric Straw. He seemed serious. Though I’m biased, I never thought my name had that much cachet. When I’m feeling down, however, I still like to imagine there’s a boat in Bavaria with my name on its side. But I’ll get back to water vessels later. For the moment, I’m going to tell you a bit about the non-boat version of me. 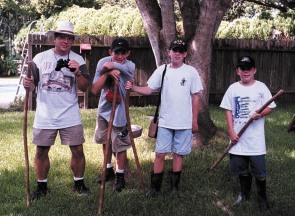 My Uncle Russell, cousin Wesley, Me and brother Shane

I’m a 30-year-old guy who grew up in the sprawling suburban expanse of North Texas, where streets named Rustic Mesa and Twin Falls Drive offer zero insight into what you’ll find — generic American lawns, high-fenced back yards surrounding brick homes with foundation problems. Nevertheless, I had a great childhood, which some might contend has continued into my 30s. I spent my formative years battling fire ants, freezing G.I. Joes in clear plastic cups and depositing my weekly allowance into the cash register of the chain-smoking baseball card shop owner. Yet, my favorite activities involved our local creek. My brothers and I spent many magical Saturdays in rubber boots, frolicking in muddy pools of fertilizer runoff and capturing slimy things. It was a charmed life. 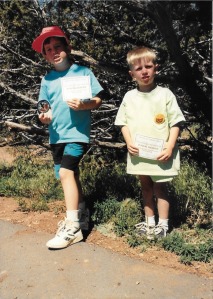 My parents took us on vacations to our nation’s natural areas. Some of my first memories include seeing a black bear in the Smokey Mountains and collecting trash to become a Jr Ranger at the Grand Canyon. Classmates went to Disney World and we went to North Dakota. I wouldn’t change it. We spent many weekends at my Grandparents country place in Central Texas. It’s a 16 acre, mostly wooded area down a red dirt road; we literally had to go over the bridge and through the woods to get there. We kids had a rock mine, treehouse and all the poison ivy we could handle. It’s where I learned to canoe on a cattle pond in my Granddad’s baby blue 1960s creation that still rests upside-down under an oak tree. Summer trips to National Parks, playing in our neighborhood creek and time in ‘the country’ grew my love for the outdoors, wildlife and the wild places we call nature.

At Texas Tech, I earned my degree in Environmental Conservation. After college, I spent around a year traveling Australia and Europe (the reason I created this site). As a migrant worker, I picked grapes and apples in Australia. My best friend and I then became bums in Europe for a while. I highly recommend both kinds of trips. After returning home, I got a job as an environmental consultant, which I’ve been doing ever since. Well, at least until I decided to save up, quit and canoe around the country.

Why on earth would I do that? I want to get Outdoors. I want to wake up along a misty river, re-start the campfire and boil a pot of crappy coffee. I want to rekindle the reasons I earned a degree in the Environmental Sciences. I want to see the nation, from the grandiose displays of Nature’s power to the more unassuming corners of our country (I’m looking at you Delaware). I want to meet Americans from all backgrounds, whether they came here 18,000 years ago or 18 days ago. I want to talk to people and get their thoughts on their home, environments, etc. I want to restore some faith in my country after whatever the hell happened in 2016.

I’ve always loved canoeing. I adore gliding over shallow waters, passing under the shade of high trees, arching over the void above a river and being as loud or as silent as you want. The canoe is big enough to hold tons of supplies and another paddler, but small enough to man solo and strap to the top of a car. You can maneuver it through swamps, marshes, lagoons lakes, rivers, creeks, friendly coastal waters, small rapids and most anything a foot or deeper. Some tout the kayak, but give me the canoe.

Fundraising: It’s important to me to raise money for a nonprofit I truly respect. I’ve sought out, spoke with and I am partnering with American Rivers to raise money for their organization. I’d like to accomplish something greater than just fulfilling my personal dream. Perhaps you’d like to ‘sponsor’ me a buck per state ($50), or give whatever you see fit. Donations all go to American Rivers and are tax deductible. I also understand if you’d just like to follow me. If so, do consider spreading this site to folks whom might find my Canoe 50 Campaign intriguing or have some karma to catch up on. My fundraising link is https://www.crowdrise.com/canoe-50-campaign Check out more about American Rivers and their goals/accomplishments here: https://www.americanrivers.org

The Parameters: I decided upon all natural bodies of water. I plan on canoeing as many free flowing, un-dammed, ‘wild’ rivers and streams when possible. I will paddle watersheds with dams but will avoid the man-made reservoirs and lake-like portions of dammed rivers. I want to incorporate a wide variety of water body types and explore different ecosystems —deserts,  mountains, prairies, wetlands and even the tropics (I thank you, Hawaii).

My friends on a 4-day canoe tour along the Current River, MO

I’ll camp overnight along each state’s waterway I canoe. Staying a night won’t only provide ample opportunities to freak myself out in the dark, but will also ensure I get a more complete feel of each ecosystem. It will also mean I can’t just put my canoe in a duck pond in Rhode Island, paddle a circle and declare the state “done!” I’ll float most of the waters alone, but hope to have some family and friends join me on occasion to make sure I don’t turn feral and forget how to interact with humans.

Certainly, this is a risk. There’s danger in the driving, canoeing and not to mention camping alone in bear country. There’s that little question of future employment when I return. There are plenty of fair reasons to terrify the part of me that uses common sense. But, again, I want to take a risk and it’s not taking a risk if you remove all uncertainty. Great adventures don’t start with everybody agreeing it’s a good idea. Now, whether my project will be a resounding success or a glorious public failure remains to be seen. Either way, it’s a true challenge, which I’m going to try my damnedest to accomplish.

Those of you who live throughout the USA, in states far afield from Texas, you may hear from me. And if you have a couch, floor or a garage/treehouse that gets lonely, let me know. It stands to reason I’ll need to shower on occasion. I start the journey in mid April and I’ll be heading through the Southeast, visiting states in a serpentine, counter-clockwise, fashion. Please contact me if you have any questions or any great ideas for me to shoot down.

Finally, I’d like to thank my friends, family and, especially, my girlfriend, whom have already shown great support on my endeavor.

11 Responses to About My Canoe 50 Campaign